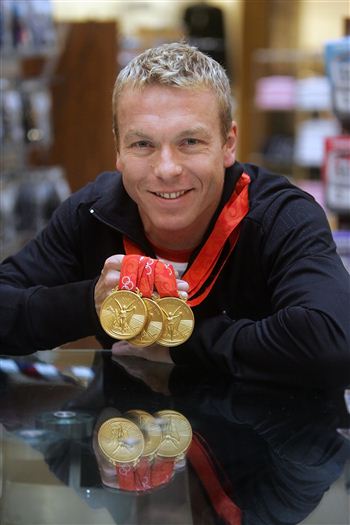 OLYMPIC hero Sir Chris Hoy is to marry after announcing his engagement to his long-term girlfriend.

The cyclist, 33, whisked Sarra Kemp, 28, away on a surprise trip to Prague for the Easter weekend before asking her to marry him with a diamond engagement ring.

Chris’ mother, Carol Hoy, said the family was overjoyed to hear the news and feel like Sarra is already part of the family.

She said: “We couldn’t be happier. Sarra is a lovely girl and he had been seeing her for quite a while. Chris phoned me on Sunday morning to tell me. It was a very pleasant surprise.

“He took Sarra to Prague for the weekend – she didn’t know where they were going. Then he asked her to marry him, and she said yes. He had the ring with him – it was very romantic.

“They are a lovely couple. We’ve met her family several times when they’ve been to watch Chris racing.

“Chris is back in Manchester at the moment, getting back to fitness and starting to train again.”

A date and location are yet to be decided, although it’s unlikely to be before the Commonwealth Games next summer.

Devoted Sarra was at the side of the track in Beijing when Chris became the first British athlete in 100 years to win three gold medals at a single Olympic Games.

The couple met two years ago at a mutual friend’s party in the Grand Cru bar in the capital.

Sarra has previously said when she saw Chris in the bar she thought he was handsome but didn’t know who he was.

At that point he had already gained fame by winning gold and silver medals, World Championship titles and Commonwealth Games medals.

But it wasn’t until a friend told her he was a gold medallist that she realised who she was talking to.

The pair hit it off instantly and have been devoted to each other ever since, despite maintaining a long-term relationship.

Sarra is a solicitor at Edinburgh based firm Balfour and Manson and specialises in personal injury law.

She did her traineeship with Balfour and Manson before qualifying as a solicitor in 2004 when she was offered a full-time job with the firm.

Chris dad David added: “My wife and I are very happy, Sarra is a lovely girl.”

Judy Murray posts pic of Andy during his Eminem phase