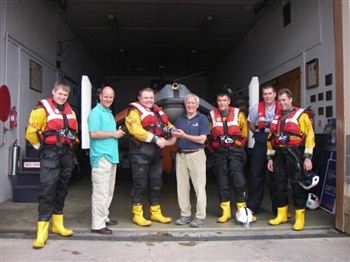 A HERO lifeboat man has been banned from the high seas after bosses ruled his new home is too far away for its rule book – at less than half a mile away.

Michael McErlane, 40, has been on the crew for almost 24 years and served on around 500 lifesaving rescues, personally saving 13 people and been presented with a bravery award from the Queen.

But now he has been told his services are no longer required after he moved his family to a larger house which falls just 0.2m outside the approved catchment area – or just a four minute drive to the boathouse.

Mr McErlane, a helmsman at the Kinghorn station, has been grounded for the past three weeks after the RNLI stuck by its decision that only residents of Kinghorn can serve on the boats.

He only moved his family to a new, larger house in Kirkcaldy last month because they were upsizing thanks to the birth of his newly-born daughter Rebecca.

The dedicated lifesaver has spent all of his adult life helping to keep the waters safe around Kinghorn, Fife.

But now he’s desperately disappointed with the official RNLI decision and he claims lives could be lost because of the “barmy ruling”.

As recently as April 9 the Kinghorn lifeboat was unable to scramble to an emergency call about “something” floating in the water because the stand-in helmsman did not respond quickly enough.

Luckily, a nearby crew from Queensferry responded to the call, although the incident turned out to be just a piece of floating wood.

Mr McErlane said: “I’ve been volunteering for the lifeboats for almost 25 years and have put my life on the line countless times.

“At first I was really angry, but now I’m just disappointed with the decision, which when you think about it is a barmy ruling.

“All I’ve done is move house to give my family a better standard of living, and this is how they treat me.

“It’s not as if I’ve moved miles away – in fact, as the crow flies, I’m actually less than half a mile outside the catchment area.

“It’s a crazy situation because I should still be leading my team out there helping to save lives instead of sitting here twiddling my thumbs.

“And as the incident last week proved, the RNLI’s decision could well come back to haunt them.”

Charlie Tulloch, lifeboat operations manager at Kinghorn, claimed the ruling that bans Mr McErlane from the seas would apply to anyone wanting to join the service.

He said: “The problem is that Michael has moved out of the Kinghorn area. We have a clear policy, and for some reason Michael seems to think it doesn’t apply to him.

“The fact is that ever since the station was set up we have had restricted recruitment. I have turned down dozens of requests from outside the area.”

A spokesperson for the RNLI said: “Kinghorn RNLI lifeboat station has a long-standing policy of only recruiting lifeboat crew from a set catchment area.

“These operational arrangements have been agreed with the Divisional Inspector and are deemed to be in the interest of the safety of the volunteers responding to an emergency as well as the stations overall efficiency.

“When such arrangements are in place they are usually a response to local conditions such as traffic, travel constraints and accessibility, which has to be considered for the safety of the public and our volunteers.

“Michael McErlane has been a long time valued member of the Kinghorn RNLI lifeboat crew and we would welcome his continued involvement with the RNLI in another capacity.

“Kinghorn RNLI lifeboat was tasked to investigate something floating in the Firth of Forth on Thursday 9 April.

“South Queensferry who were in contact with the Coastguard were paged shortly after Kinghorn and confirmed a full crew was available.

“South Queensferry RNLI lifeboat launched to investigate and found a log to be the object in question.”