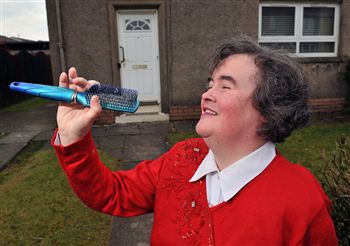 BRITAIN’S GOT TALENT’S latest superstar Susan Boyle could about to join the Hollywood ‘A’ List – after being offered her first MOVIE role.

Virgin Susan – who shot fame after just a single appearance on the TV talent show – has impressed Hollywood bosses so much she is being lined up to appear in the black comedy Counterswirl.

And she could be starring alongside Only Fools And Horses legend Roger Lloyd Pack who played Trigger in Britain’s best loved comedy.

The news comes just days after it was revealed the devoted church-goer counts movie legend Demi Moore among her celebrity fans with a big money offer to appear on the chat-show circuit with Oprah.

Producers of the movie Carpe Diem Films said they would be “honoured” if Susan would consider taking the leading role of their main female character Magda in the comedy feature.

The movie will be filmed on location in Scotland, Ireland, Argentina and Australia and will see Susan acting opposite TV legend Roger Lloyd Pack – Trigger from Only Fools and Horses.

Producer Anna Wilding is excited about possibly working with Susan, even though this will be the Scot’s first ever experience of appearing on film.

She said: “I would very much be honoured if she would consider the role of Magda in our black comedy feature film set in Scotland, Ireland, Argentina and Australia called Counterswirl.

“I will be forwarding her the screenplay and she will see the role is perfect for her. Roger Lloyd Pack, the British comedian, is keen to do the role of Italian vinter, Ricardo.

“I was initially going to ask the Aussie comedian Magda Sabanski – however Susan is perfect for the part.

“In fact, one of the other characters in the film even lives alone with a cat in Scotland, but I want the larger role of Magda to go to Susan.”

“I am currently in New Zealand then going on location to Perth for another movie, where we also hope to eventually take Susan to shoot Counterswirl.

“I realise it would be the first time for her.

“This is not a big studio movie, it is an independent film like Sideways, Little Miss Sunshine and Cinema Paradiso.

“It is also a black comedy so it has humour and sparkle.

“The movie is about triumph over adversity and all about dreams.”

Susan’s popularity across the world has been secured by the success of her Youtube clip and wall to wall attention from the international press from as far afield as Estonia, New York and Australia.

Susan, 48, from Blackburn, West Lothian, has taken the country by storm after performing “I Dreamed a Dream” from Les Miserables on the TV talent show Britain’s Got Talent.

Judge Simon Cowell said after her jaw-dropping performance: “Susan, I knew the minute you walked out on that stage we were going to hear something extraordinary – I was right.”

And Amanda Holden told Susan that “it was a complete privilege to listen to you”.

Susan’s popularity has grown so much since she appeared on the show that the Youtube link showing her performance has incredibly been viewed over 12 million times.

The self-confessed virgin has now even secured herself a Wikipedia entry, and some enthusiastic fans have set up a Facebook website in her honour which has attracted over 60,000 fans.

William Henderson, who set up the site, explains that he felt she was an inspiration to many and worthy of all the attention.

He said: “I thought that Susan was incredible and so just had to set up a fan site for her.

“It’s the fact that when she came out on stage, she didn’t look like Beyoncé or Rihanna, so people thought she was going to fail the auditions.

“But when she came out with her voice, everyone was shocked and loved her.

“It is a case of learning not to judge a book by its cover.

“I think she can make it right to the end.

“If not, she will still be as famous and no one will forget her at all.”

Britain’s Got Talent comes to Edinburgh