Home is where the heart is for Susan Boyle 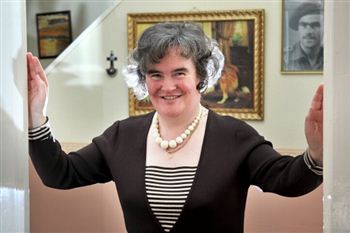 SINGING sensation Susan Boyle may be a worldwide smash – but she insists home is where the heart is.

And she is vowing to keep her Scots accent – even if it means fans in other countries might struggle to understand her.

Susan, who has been flooded with fan mail from all over the world, also admits she would jump at the chance of visiting her new army of fans in America.

But the true Brit says that she wouldn’t want to move away permanently from the home she shared with her family all her life.

The 48-year-old has been overwhelmed with attention with TV crews from across the world queuing up at her home for interviews.

So much so the local council even had to fit a brand new fence for her earlier this week for health and safety reasons to cope with the crowds.

And nowhere have people become more obsessed with Susan than in the States, where television channels across the country are broadcasting clips of her “inspirational” performance last Saturday.

Now Susan says she would love a chance to sample the American Dream – but only for a while.

She said: “I’ve been on American TV a lot and I’ve never even visited America.

“I would go, definitely, if that’s what they want.

“If I got the opportunity I would visit the country for a little while and if God’s willing, I will go.”

But she doesn’t want to move away from her family home, and is determined to keep her Scottish heritage, adding: “I’m not changing my accent or anything.

“If I’m talking to people I don’t know then I’ll put my posh voice on.

“But I’m Scottish and there’s nothing they can do about that.

“I’ve lived here all my life.

“I wouldn’t want to move anywhere else at the moment.

“The kids around here are lovely – they’re all behind me, asking me to sign autographs at the gate.

“I can’t go to the shops anymore, I just get mobbed.

While TV crews, photographers and reporters crowd round Susan’s house kids from the neighbourhood gather to get a glimpse of their new local heroine.

The manager of the local pub hopes that fame won’t take Susan away from them.

“The whole family were Blackburn born and bred, her mother, father, everyone.

“It might not be the bonniest, but it is where she’s from.”

“Susie is well known in the village and everyone’s behind her. There’s no doubt about that – we’re very proud of what she’s achieved.”