Singing Susan keeps her house clean – and her voice fresh 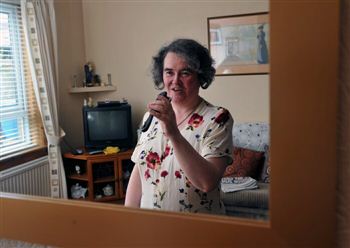 BRITAIN’S Got Talent star Susan Boyle has revealed the secret training schedule behind her incredible voice – singing while doing her housework.

The down-to-earth internet smash says she has been practicing her routine while doing the dusting and cleaning her end terrace home in Blackburn, West Lothian, getting ready for her next appearance.

And while admitting she is looking forward to getting a well earned break down the line she has laughed off any suggestion that her sensational vocals are in danger, saying she’s even had the odd day off.

She said: “I’m trying to practice as much as possible – it’s just difficult to find the time and space to do so. My phone hasn’t stopped ringing with people wanting to say congratulations.

“I usually sing a lot when I do the housework and I drink a lot of water.

“But I have had to neglected my home a little bit – the house definitely needs a tidy.

“I will never be too famous to tidy my own house – I do my own cleaning. I actually find it very therapeutic.”

Susan says she is tired from all the attention, and is even finding it difficult to find time to practice for the all-important next round.

She added: “I have to admit I never expected it to be so mad but I am loving it. My feet are still firmly on the ground.

“I’m trying to carry on as normal, I didn’t realise the attention would be on this scale. To be honest when I entered I didn’t think anything would come of it.

“I will need a holiday after all of this is over. I have a nephew in Australia and the people over there are very nice so that will maybe be where I decide to go.

Susan has lived in the same council house since she was born, and even sleeps in the same room she grew up in.

The singer – one of nine children – was born with slight-brain damage and lived with her parents until they passed away.

And she says she entered the competition to make her mum and dad proud – and hopes they are looking down on her.

She said: “My mum was a singer too – she was always singing around the house. I think that’s where we all learned it from, we grew up singing.

“My dad sang too.

“They were always encouraging me to get into singing, and it was my mum who pushed me into joining a choir.

“She knew I had to do something with my talent.

“Both my mum and my dad would be very proud of me, and I know they will be up there watching over me.”

Susan confessed she had tried to get her sister to enter the competition too, because she is not the only talented one in the family.

But she said: “I wouldn’t say I’m the best, in my opinion everyone in my family can sing and I’m too modest to say that I am best.

“I just entered the competition.

“I wanted my sister to enter too, but she shied away from it. She just didn’t want to.”

When Susan was at school she was targeted by bullies because of her disability and has been tormented by local children who throw things at her house and call her names.

But that has all stopped since she blew them all away with her singing on Britain’s Got Talent.

She said: “They used to throw things and shout outside my house but they don’t do it now.

“The kids don’t bother me at all, they are just mucking about. They are really nice kids, a nice lot. They have been handing in cards and knocking on my door to say well done.”

The singing church worker has even been given the thumbs up by her priest, Father Haluka, and her former choir, The Tocatta Ladies Choir.

She said: “I was in church last Sunday and I’m hoping to be there again this week.

“Father Haluka has congratulated me on how well I’m doing and the congregation has done the same.

“My old choir have been in touch and send their best wishes.”

But Susan insists she doesn’t want to count her chickens – even though she would love to duet with her idol, Elaine Paige, as some have suggested.

She said: “All the stuff about record deals and winning the show I don’t want to talk about, I just want to take baby steps.

“In the future I’d love to do a duet with Elaine – she’s just brilliant.”

Her former voice-coach Fred O’Neil said Susan had to keep practising if she was to fulfil her obvious potential.

He said: “She is like an athlete – she has to keep using her voice to keep it.

“If she wants to keep on singing big show songs she has to keep on practising. It is very different from singing for a couple of minutes on Britain’s Got Talent.”

“She always had a lovely, calm, beautiful rounded voice.

“It is a very good instrument.

“But I am concerned about her being surrounded by all these PR people that she won’t be given the time to sing.”

“I want to see her go about this with some space to breathe and grow.”