Susan Boyle attracts fans from across the world 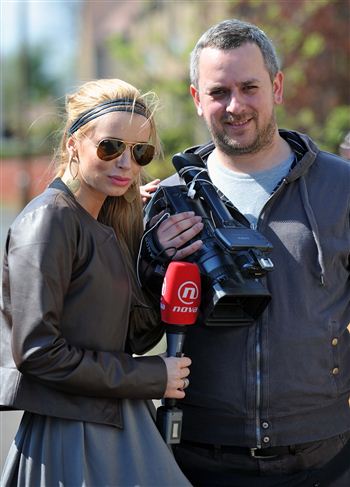 They even ditched the London premier of new movie State of Play starring Russell Crowe for the chance to see the West Lothian singer.

The Britain’s Got Talent megastar shot to fame after her startling performance on the reality show last week and she has attracted interest from across the globe.

And stunning Fani Stipkovic and pal Milan Bajic are living proof of that.

They were in London covering the premier of new movie The State of Play – but the pair decided to ditch Aussie hunk Russell Crowe just for the chance to meet Susan.

Former model Fani, 27, has rubbed shoulders with some of the most famous stars on the planet but admitted she was nervous about finally meeting her new favourite performer.

She said: “Since the show was shown on Croatian television, the public have gone mad for Susan.

“We all love her so much in Croatia.

“We were in London the movie premier and decided at the last minute to jump on a plane in an effort to meet Susan and to tell her how much the Croatian people love her.

“I had no problems leaving Russell Crowe to come here, because this will be a once-in-a-lifetime opportunity to meet her.

“After seeing her sing we Croats all really admire her, and she proves that the dream can come true. It is never too late to shine.

“Susan proves that talent is the only thing that matters, and it’s great to see someone with real talent make the breakthrough.”

Fani and Milan both work for Croatian television company Nova TV and the pair fly home today (thurs) after their whistle-stop journey to meet the country’s newest superstar.

Scots banker in coma after falling from balcony in Croatia