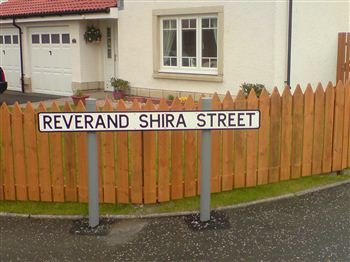 DOZY builders have become the laughing stock of a new housing estate after putting up a street sign with glaring spelling mistakes.

Persimmon Homes named one of the new streets in Kirkcaldy after a respected former-minister of the area, the Reverend Robert Shirra.

But the housing company have put up signs with two obvious mistakes bearing the title REVERAND SHIRA Street.

Local resident Annie Burns, 61, said: “I couldn’t believe it when I spotted it. At first I thought I was seeing things.

“A company such as Persimmon should really be employing people with a better education.

“I bet the other housing companies will be laughing when they see such a daft mistake.

“It’s one thing getting the name wrong, but to spell the word reverend wrong is just unforgivable.” 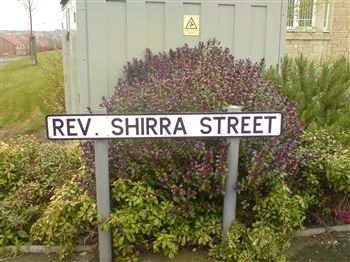 John Cassie, regional chairman for Persimmon Homes in Scotland, said: “We are aware of the misspelling and are working with our contractors and Fife Council to rectify the issue as soon as possible.”

And although the company are laying the blame for the gaffe firmly at the door of the local council for the mistake, council officials are failing to see the funny side.

A spokesperson for Fife Council said: “That particular street in Kirkcaldy has not actually been adopted by Fife Council as yet.

“But, like Persimmon Homes, we hope the mistake will rectified as soon as possible.”

The Rev. Robert Shirra was a popular minister in the Kirkcaldy area and lived between 1724 and 1803.