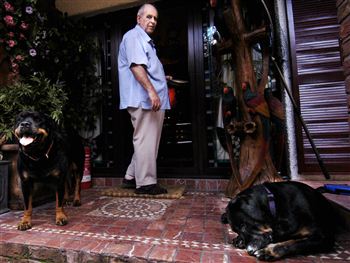 BAY CITY ROLLERS manager Tam Paton was snubbed by his former band as he was laid to rest yesterday.

The controversial music mogul passed away on April 8 after being found dead of a suspected heart attack at his home.

Hundreds of mourners packed into Mortonhall Crematorium in Edinburgh to pay their final respects to Paton – but his former charges were nowhere to be seen.

70’s heartthrobs Les McKeown, Derek Longmuir and Stuart ‘Woody’ Wood, who have been involved in protracted talks with Paton about Rollers’ royalties, all stayed away from the 45 minute service.

He then went on to reveal that Paton had left all of his huge inheritance to various charities close to his heart.

Around 250 family, friends, and business associates shuffled their way into the crematorium, following Paton’s oversize coffin into the chapel.

There was also a distinct lack of floral tributes as only four or five simple bunches were laid in his honour near to the chapel’s doors.

The service was conducted by the Reverend Bob Glover, the minister at Port Seton’s Chalmers Church and a close family friend.

During the service Rev Glover told the mourners that “this was no place for judging” before leading into the hymn ‘Father, Forgive Our Foolish Ways’. 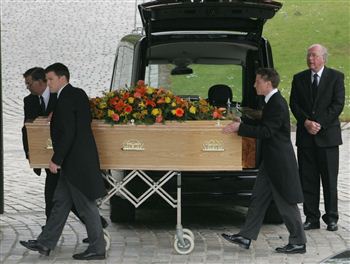 The family tribute was given by nephew Phillipe Bousiere who spoke of Paton’s early impoverished life growing up in Prestonpans.

He said “Tom was different to everyone else” and that from an early age he had a “remarkable musical talent”.

He said: “Tom always had a great love of animals and the underdog. Money and all its trappings did not interest him”

Mr Boussiere then went on to berate the press for their “sensationalist” stories concerning his late uncle, but also commented that Paton had “moved in circles we are glad not to know”.

After the service, friend and mourner David Dalgleish, 63, said: “Tam was a dear friend to many not just myself, and I trusted him implicitly.

“He was always there when you needed him and he had a heart of gold.

“Musically, he was a genius and could play many instruments – he didn’t just manage bands.

“It’s a sad loss for everybody who knew him.”

Paton had made millions through the success of the Bay City Rollers in the 1970s, but was a far more controversial figure in recent years.

He was convicted of sex offences against two boys aged 16 and 17 in 1982, but cleared of child sex abuse allegations in 2003.

The 70 year-old was also convicted of drug dealing in 2004 after £26,000 worth of cannabis was found at his home, but was cleared on appeal.

Since they split 30 years ago, former band members Les McKeown, Stuart ‘Woody’ Wood, Derek and Alan Longmuir and Eric Faulkner have been locked in a bitter feud over claims of missing royalties.

Paton had previously said that after his death his property empire, TDP Investments, would be taken over by trustees, and his will is said to include cash for various animal charities and for the children’s hospice at Kinross, Fife.

Thomas Dugald Paton is survived by his brother David, and his two sisters Mary and Jessie.