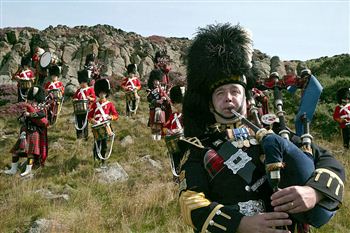 A CHAMPIONSHIP winning pipe band is facing an unenviable dilemma – after being double booked to play in front of the Queen and make an appearance at the Brit Awards the same night.

The Royal Scots Dragoon Guards are in such demand they have been asked to play at the Windsor Castle Royal Tattoo next month, but the pipers have also been nominated for a prestigious Classical Brit Award the same night.

Now the band’s pipe major is desperately trying to make his Royal excuses and take his band to the awards ceremony on May 14.

The Edinburgh-based pipers have been nominated for album of the year for Spirit of the Glen: Journey, which was recorded in the middle of war-torn Iraq last year.

The Guards began recording the album at a small Scots studio early last year, but were forced to shelve their plans when they were called away for a six-month tour of duty.

But in a heroic bid to get the album in the shops by Christmas, producers flew out to Basra and set up portable recording equipment in a military tent.

And in searing heat which reached temperatures of up to 60 degrees, the men completed the album in between their other military duties.

Pipe Major Ross Monroe, from Edinburgh, said: “I’m desperately trying to see if I can get the band off the event that night.

“There are a number of bands booked for the Windsor Tattoo, but it will all depend on the organisers. I may be able to go to the Brits by myself, but I am really trying to push for the whole band to go.”

The pipe major and his band of 24 pipers and drummers face stiff competition if they do make an appearance at this year’s awards ceremony.

Also up for the best album gong are the world-renowned artists Katherine Jenkins, Andrea Bocelli and The Priests.

The award will be presented by former-pop star Myleen Klass at the Royal Albert Hall and is voted for by the public.

The soldier’s debut album, Spirit of the Glen, rocketed to the number one spot on its release and held the top spot for an impressive 14 weeks before being toppled.

During their spell at the top of the charts the pipers outsold international acts such as Bon Jovi and Elton John.

The band missed out on last year’s honour after being pipped at the post by only 300 votes, coming in a creditable second place.

Mr Monroe said: “There is stiff competition for the award, but we hope that perhaps who we are and what we may have done to make this album may give us a chance.

“This is our job, but admittedly it is quite a cool job to have.”

To vote for The Royal Scots Dragoon Guards, visit www.classicalbrits.co.uk