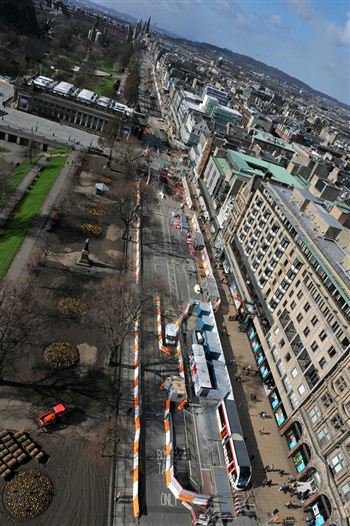 CONTROVERSIAL tram bosses have come under fire after paying themselves almost £1 million in bonuses – before a length of track has been laid.

Edinburgh’s new tram scheme has come under constant criticism since plans were announced to introduce them onto the capital’s streets.

Traders, shop owners and residents have all slammed the work for tearing up the city’s streets and for putting businesses under threat.

But bosses at tram firm TIE have seen fit to pay themselves a total of £970,000 in bonus payments from the public purse – and that figure does not include any payments made in the last 12 months.

The payments have been branded an “absolute disgrace” by politicians, with one insider claiming the “vast majority” of the cash will have gone to senior management.

And details of the bonus payments, released under the Freedom of Information Act, come just days after Edinburgh City Council confirmed it would be scrapping one of the lines due to the recession.

Fed up with chaos

No information was released as to which individuals benefitted from the payments, which were awarded to those achieving what TIE called “defined milestones and objectives”.

SNP MSP Shirley-Anne Somerville said the bonuses would be a “bitter pill” for residents “fed up with the chaos” caused by the tram works.

She said: “It’s an absolute disgrace that TIE staff have been awarded almost £1 million in bonuses from the public purse before a track is even laid.

“Bonuses are supposed to be awarded on the basis of jobs well done – what has been achieved so far apart from delays, disruption and cost overruns?

David McLetchie, former-Scottish Tory leader and current MSP for Edinburgh Pentlands, said: “I’m astonished that people are being paid bonuses for a project that is over budget and not on schedule.

“They should not be paying people bonuses until the job is done, and clearly there’s still a long way to go.”

A TIE spokesman said: “Staff bonuses are part of modern HR strategies for the recruitment and retention of staff.

“This especially applies to projects of this type where there is a clear end date, as part of attracting the best people to the job.”