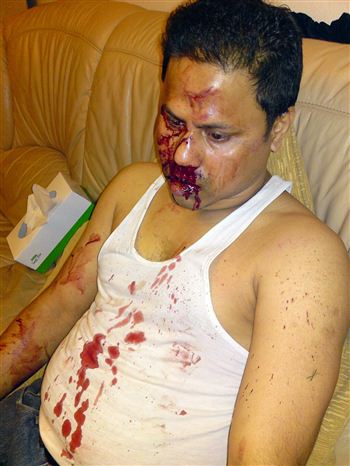 POLICE are hunting two racist thugs after they attacked a defenceless father-of-three as he walked home from work.

Jahirul Islam, 37, from Edinburgh, suffered a broken nose, cuts and bruises and a damaged knee after the two attackers repeatedly smashed a boulder against him during the brutal assault.

Mr Islam was set upon on Saturday night as he made his way home from working as a curry chef at a restaurant in the Corstorphine area of the city.

The distraught dad was punched and kicked to the ground before suffering a horrendous ten minute ordeal in which he was continually verbally abused.

The attackers then tried to strip Mr Islam of his clothes before making off with his wallet.

It has now been revealed the horrific assault has left Mr Islam having sleepless nights and is fearful on being left on his own.

Police yesterday appealed for help in tracing the two cowardly thugs, who are both believed to be between 18 and 20 year old, following the incident at about 11.30pm on Saturday.

Officers are currently scouring CCTV images in the hope the attack was caught on film.

Mr Islam, who moved to the capital from Bangladesh nine years ago, said: “I had finished working at the restaurant and I was walking my usual route home.

“A woman came past me and accidentally bumped into me. We both said sorry to each other and I carried on walking.

“But seconds later, three men confronted me asking me why I had pushed the woman.

“Before I could answer it was just an accident two of them started to punch and kick me. I fell to the ground and they were kicking, stamping and banging my head off the pavement.

“Then one of them picked up a large boulder and began smashing it down onto my knee. The pain was just so incredible I must have blacked out.”

Mr Islam, who lives at his Edinburgh home with wife Rujiwa, 31, sons Zahid, 11, Eamon, seven, and daughter Riya, four, claims the men hurled vile, racist abuse at him during the prolonged attack.

After the gang had fled, Mr Islam managed to call his brother on his mobile phone who called for an ambulance.

He received treatment at the Edinburgh Royal Infirmary and was eventually released at 5.30am on Sunday.

Doctors have advised Mr Islam to take at least two weeks off work to recuperate.

Mrs Islam also revealed her husband is failing after to cope after suffering the horrific beating.

She said: “It was so shocked when I saw what had happened to Jahirul. But since it happened he hasn’t slept a wink and he hates to be left alone in the house just in case they come back.

“These men really need to be caught quickly before they do this to someone else.”

A Lothian and Borders police spokesman said: “Police are investigating after a man was assaulted in the Hutchison Crossway area on Saturday evening.

“The man required treatment for minor injuries following the assault that took place around 11.30pm.

“Anyone who was in the area at the time and saw anything suspicious should contact police immediately.”

Police in Edinburgh are also appealing for witnesses after a man had a glass smashed into his face in an unprovoked attack.

The 24 year-old victim was drinking alone in the Brunstfield Links Bar at around 12.15 on Saturday morning, when he was approached by a man who glassed the man in the face with a pint tumbler.

He the made off from the bar, and the victim was taken to the Edinburgh Royal Infirmary where he was treated for a serious injury to his right eye.

The suspect is described as white, 28 to 29-years-old, with short brown hair, and at the time of the attack he was wearing dark-coloured jeans and a jacket.

A police spokesman said: “This was a serious and unprovoked attack which could eventually result in the victim losing the sight in his right eye.

“Similarly, anyone with any other information that can help us identify the suspect should get in touch immediately.