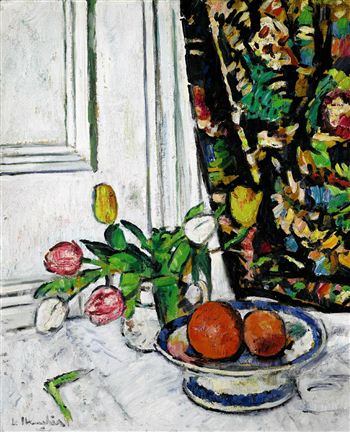 A RARE collection of Scottish artwork including sought-after pieces by Peploe, Hunter and Vettriano sold for a staggering £3 million at auction yesterday.

The 150 lots in the Scottish Picture Sale went under the hammer at Sotheby’s in London.

The highest price paid at the sale was for the rare chance to own George Leslie Hunter’s Still Life with Tulips and Oranges which sold for £433,250.

Work by past masters such as Sir Henry Raeburn and Joseph Farquarson sold steadily for around the £20,000 mark, but, Arum Lillies, a painting by Samuel Peploe sold to an anonymous buyer for an astonishing £409,000.

And Peploe’s 1920’s painting Still Life With Roses, which is considered to be the most important work of his to go under the hammer, also fetched £265,250 to a US buyer.

The Edinburgh-born impressionist is best known for his meticulous style of painting, and was obsessed with creating the perfect still life.

Seven paintings by the Fife-born artist Jack Vettriano also sold for a whopping £358,000. 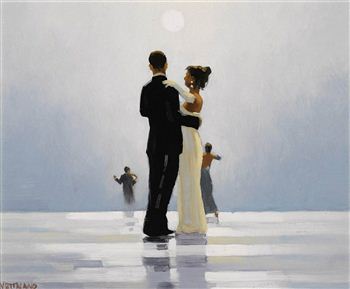 Other notable Scots artists with their work up for sale at the auction included Anne Redpath, Joan Eardley and Peter Howson, three of the country’s best known contemporary painters.

Big price for a Vettriano

Many of the paintings had never been seen in public before, adding to the excitement of the occasion.

The paintings were originally due to be auctioned at a Scottish location but the sale was moved to London to cope with the anticipated demand from abroad.

Many of the lots come from the stunning collection of art collector Anthony Rampton who loved Scotland and spent a lot of time on the island of Arran.

Vettriano’s Dance Me To The End Of Love attracted the most interest of his work selling for £121,250.

The painting is among a handful of Vettriano’s best-known images depicting two ball-room dancers dancing the night away on a misty beach.

The picture’s popularity endures because it is beautifully romantic and evokes nostalgic memories of black-and-white films.

In 2008 almost £9 million of Scottish art was sold in the two Scottish Pictures sales held – and keen bidders and high prices made eight auction records.

He said: “We are delighted that Still Life with Tulips and Oranges by George Leslie Hunter achieved the superb price of £433,250 at today’s auction.

“It is one of the most important works by Hunter to ever appear at auction, and the market responded accordingly, setting a new record for the artist at auction.

“There were further strong prices today for colourist paintings elsewhere in the sale with Peploe’s Arum Lilies fetching £409,250.

“Works from the collection of Anthony Rampton OBE were also highly sought after with Brass, Hair and Wool, a collage by Joan Eardley RSA selling for £157,250 – well over the high estimate of £120,000 and only a whisper away from setting an auction record.”