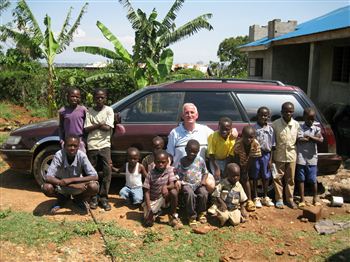 A SCOTS granddad delivering humanitarian aid to some of the world’s poorest children was left star-struck – after bumping into Barack Obama’s granny.

Charity worker James Harkins, 66, from Crossford, Fife, was in Kenya last month providing help to 40 poor orphans when he got the chance to stop and chat with the US President’s Kenyan grandmother, Mama Sara Obama.

And James was invited to take part in a family snap with a life sized cardboard cut out of Barack himself.

The President’s granny has constant 24-hour security provided by the Kenyan authorities, but the matriarch still insisted on meeting the Scot.

And the honours did not stop there for the Fife granddad-of-three as a young African widow with triplets named one of her children after the Edinburgh Direct Aid worker.

James said: “I was out on safari one day when the guide said we were near to Mrs Obama’s home. I immediately asked if we could go there.

“When we arrived her house was surrounded by guards, but when we said we’d come all the way from Scotland to help out she invited us all in.

“It was so lovely to meet her and her family – she could not have been more hospitable, and through the interpreter kept asking us about the work we were doing in Kenya.

“In her house there were lots of pictures of Barack, and she even had one with him carrying maize on his back taken when he was out there visiting.

“Just as we were leaving his step-brother produced the cardboard cut-out of Barack. It was a very funny and surreal moment.”

Baby named in honour of Scot

The retired Scottish Power worker was in Kenya as part of a team from the Edinburgh Direct Aid charity who were completing an extension to the Arise and Shine orphanage.

And he was overwhelmed with emotion when one young mum showed her gratitude for all James’ efforts by naming one of her newly-born triplets in his honour.

James said: “I’d heard about the young woman having triplets and thought I just had to help out. Because the babies were very underweight we managed to get her to the hospital to have them all checked out.

“While she was there we gave her clothes, food and toys, and she was so touched by what we had done she named one of the kids after me.

Kenya has been ravaged by HIV and Aids, and has been plighted by violence after a disputed election result caused large-scale bloodshed in the city of Kisumu.

But all the country’s problems are not deterring the feisty Fifer as he plans to return to Kenya later this year to help build new, much-needed toilets at the orphanage.

James said: “Of course, it is very dangerous in some parts of the country, but I’ve got no hesitation in going back out there because the work we do is so important.

“The next project is to build proper toilets for the kids because at the moment all they’ve got is a hole on the ground.”

James has been working with the Edinburgh-based charity for the past ten years and has been to some of the world’s worst-hit disaster areas to help.

His excursions include travelling to Bosnia, Sri Lanka and Pakistan in recent years to help clear up after war and natural disasters hit those countries.

And James’ charitable efforts were recognised last year when he was personally awarded an MBE by the Queen in a ceremony at Buckingham Palace.