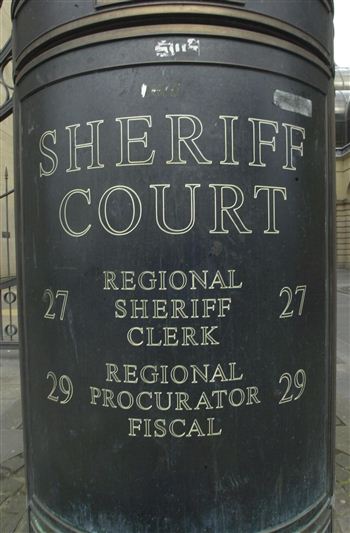 SCOTLAND’S courts service is paying out around £100,000 a year bringing witnesses to court from outside Scotland.

In the last five years, £448,166.53 was spent on bringing witnesses to Scotland from the rest of the UK and overseas.

But a new law going through Parliament could soon mean that thousands of pounds can be saved for the taxpayer by allowing people outwith Scotland to give evidence through video link.

As it stands only those from abroad can be given special permission to give their evidence via video from their home country.

But part of the Criminal Justice and Licensing (Scotland) Bill 2009 now going through Parliament would extend that to anywhere outside of Scotland, including the UK, delivering potentially huge savings.

Travel costs paid out by the Crown have stayed relatively stable over the last five years.

The figures do not include travel expenses that are paid by the Crown to people who travel within Scotland to give evidence.

Crown Office and Procurator Fiscal Service currently reimburses witnesses for their travel expenses no matter where they travel from, and in some cases make travel arrangements for them.

The Crown uses Carlson Wagonlit Travel to book the travel arrangements – an international business travel company based in France.

But despite the costs, Scotland has a high conviction rate which many think justifies any outlay.

A spokesman for Victim Support Scotland said: “It’s fundamental to the process of law in Scotland that witnesses are able to attend and give evidence at trials.

“Without that process the best interests of justice would not be served.

“There are those witnesses who for financial reasons need assistance in attending on the specified date.”

They believe that the 90 per cent conviction rate revealed by the Scottish Government figures for 2006/7 are partially due to the service provided to witnesses both by the Crown and by independent charities like themselves.

In 2006/7, only two per cent of court cases ended in a not guilty verdict, and one per cent were not proven.

The spokesman added: “The conviction rate is high in Scotland, and ensuring that witnesses can attend court is an important part of that.”

The idea of video linking is already proving successful in some specialist cases.

Often victims of sexual crimes, especially young children, give their evidence via video link from a different room within the court building.

Now Victim Support Scotland doesn’t see why this could not be extended to other situations, such as witnesses who live overseas.

“For example, a child in a sexual abuse case may be in the same court building but not present in court.

“We see it as a logical extention that someone would be able to give evidence from overseas and reduce the costs for the Crown.

“It is all part of the modern process of law.”

Video links to foreign countries are not unheard of either.

In August 2002, a witness living in Australia gave evidence to the High Court in Edinburgh by video link from a courtroom in Brisbane.

They were put under oath in both countries.

A spokesman for the Crown Office and Procurator Fiscal Service said there is the hope that new legislation will allow video links from other parts of the UK.

The spokesman said: “Under existing legislation, the Crown can make an application to the Court for a witness to be allowed to give their evidence by live video link where the witness lives outwith the UK.

“In order for the request to be granted, the Court must be satisfied that it is in the interests of justice, and is not unfair to the accused.

“If the Criminal Justice and Licensing (Scotland) Bill 2009 is approved by the Scottish Parliament in its current form, the Crown would also be able to make such an application in relation to witnesses who live in the UK, but outwith Scotland.”