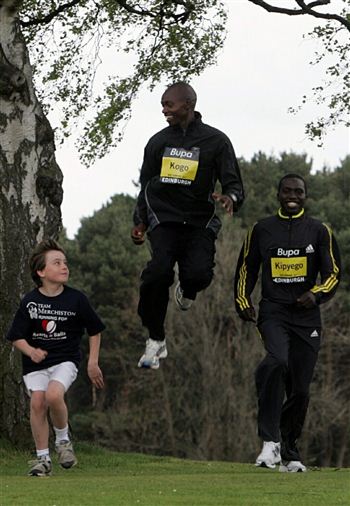 OVER 200 classmates of a Scots schoolboy who injured his spine in a horrifying rugby accident will sweat it out in Sunday’s Great Edinburgh Run.

Former Scottish under-18 international Nick Watt, 18, is still recovering after a scrum accidentally collapsed in a match between two rival private schools.

Amazingly, his friends at the school have raised over £40,000 for a capital-based charity assisting his recovery, and 258 pupils and teachers have signed up to run the 10km race this weekend.
Their training received a welcome boost on Friday from last year’s race winner Bernard Kipyego of Kenya, and Olympic bronze medallists Deena Kastor and Micha Kogo.

While the three pro runners will no doubt head the field as pre-race favourites, the Merchiston boys will be the Bupa run’s largest single group by far, and will include headmaster Andrew Hunter and over 50 parents.

The fundraiser was the brainchild of one of Nick’s best friends, Patrick Costello, who said he was amazed to more than double his initial £10,000 target.

He said: “This is such a worthwhile cause and he is such a good friend to many people in the year.

“He is very happy that we are doing it, although I think he was a bit shocked at first to find out how many people are doing it.

“He comes into school every Wednesday and has started to get the feeling and movement in his arm again.” 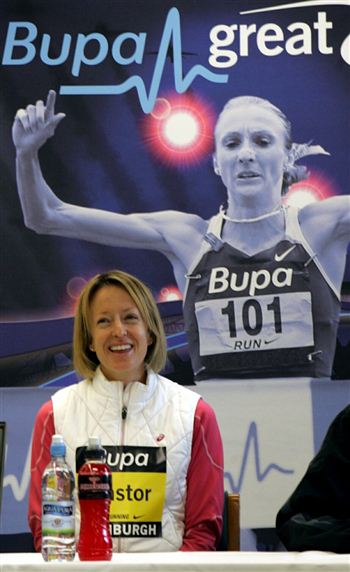 The money will go to Hearts and Balls, who can help rugby players who suffered spinal injuries to get moving again with new wheelchairs, specialist mattresses, car insurance for a specialist vehicle, or even a carer.

Nick’s dad Willie Watt said: “Nick and all of his friends and family are very supportive of the Merchiston boys’ commitment to Hearts and Balls.

“We see it as both a great sign of the friendship that his school friends feel for Nick and also a very practical source of funds and support to Hearts and Balls which looks after all of those who have been injured playing rugby, the game that they love.

“We would like to thank Patrick Costello for coming up with such a great idea.”

Kastor, the 2004 Athens Olympics bronze medallist and 2006 London Marathon champion, was one of the pre-race favourites in last summer’s Beijing Olympic marathon until a foot injury forced her to drop out just three miles into the endurance event.

She told a press conference that she had heard Nick Watt would be at the 10km run on Sunday, adding: “It would be absolutely fantastic to meet him.”