Visitors will be able to tour the collection, certified by Guinness World Records as the largest of its kind, in a high-tech vault at the Scotch Whisky Experience on the Capital’s Royal Mile.

The collection contains more than 3000 whiskies built up over 35 years by Brazilian whisky enthusiast Claive Vidiz, and has been shipped across the Atlantic especially to mark Homecoming 2009.

As well as the collection itself, the exhibition features an interactive tour, charting the history of Scotch whisky from a cottage industry to a famous brand recognised world-wide.

In a speech to mark the opening of the collection, First Minister Salmond said that Scotch whisky was one of Scotland’s most iconic contributions to the world.

He said: “Whisky is an iconic and high-quality product which has hugely influenced Scotland’s heritage, culture and economy. 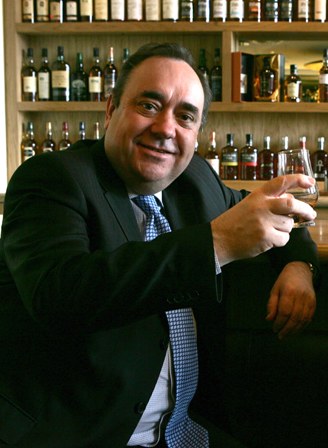 “A billion bottles of Scotch are enjoyed each year, and it is exported to 200 countries and generates more than £2 billion for Scottish exports.”

The huge collection, described by whisky experts as “invaluable”, is part of a £2 million investment at the Scotch Whisky Experience.

The whiskies were shipped from Brazil after specialists spent months preparing the collection, which has been bought in full by drinks manufacturers Diageo.

Organisers are hoping to draw more than 30,000 extra visitors annually to the display, which contains a number of unique, special edition Scots whiskies.

“There are some extremely rare and exclusive single malts, where perhaps only 100 bottles were made, and then only given as gifts.

“Visitors will see some really unusual things too – whisky inside a grandfather clock, whisky that’s been made into a chess set, for example.

“I would challenge anybody in the world to come here and be familiar with every single whisky, there’s going to be lots of surprises within the collection.”

The opening of the display, which is being kept by the Scotch Whisky Experience for ten years, marks the first day of the Spirit of Speyside Whisky Festival.

Whisky is one the five main themes of Homecoming, and the festival is expected to generate more than £750,000 for the Scottish economy.

First Minister Salmond added: “This year marks the 250th anniversary of the birth of our greatest poet Robert Burns.

“I’ve been known to partake in the occasional dram myself, but not quite to the extent of the bard.”