Singer Susan Boyle was said to be “thrilled” after hearing niece Jacquelene Houston, 31, had given birth to son James John – named after his two granddads – at St John’s Hospital in Livingston, West Lothian. 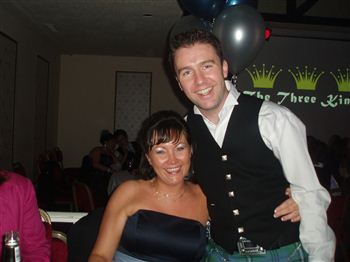 And the close-knit family revealed that the tot will be sleeping in the same cradle that Susan did as a child.

Mum Jacquelene, pictured left with husband Stephen, said: “He will be sleeping in the same Moses basket that Susan slept in when she was a baby.

“Hopefully hearing her on the TV show and sleeping in her basket will mean he will be musical just like his great auntie.

“I didn’t get that gene. All my aunts and uncles are brilliant singers, and my grandparents were very musical too.

“But for some reason I am tone deaf.”

Jacquelene went into labour on the 25th of April – two days before her due day and little James arrived 18 hours later.

But while she’s been desperate to see the new arrival, Susan’s hectic schedule means it will be this weekend before she gets to clap eyes on the tiny tot.

Proud granddad James – Susan’s older brother – said: “The family has all been round to visit him and Susan is coming to see him, this weekend.

“She’s thrilled and been dying to meet him, but has been kept really busy.

“He’s got jet black hair and looks just like his mum.

“I can’t tell yet if he looks like a Boyle.

“He is called James John after his two granddads.

“This is my first grandchild and to have him named after me is a real honour.

“He’s a great wee boy and Jackie is doing well. We are just glad he has arrived safely.”

Just a week before he arrived Jacquelene and husband Stephen had tuned into Susan’s BGT performance specially on the talent show so their unborn child could hear his great-aunt sing.

And they are now hoping little James will have picked up some of the Boyle family’s musical genes.

But “baby steps” first, of course, as his famous relative might say.