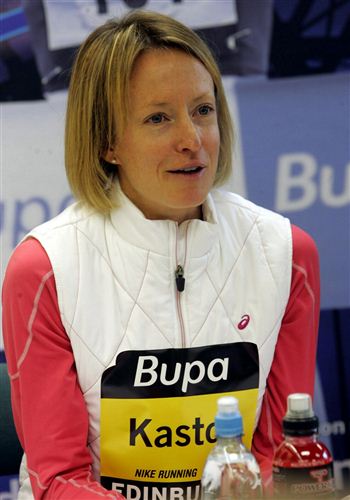 AN OLYPMIPC marathon medallist has told of her terror as a violent woman bit the leg of a trolley dolly on a flight to Scotland.

American runner Deena Kastor revealed her far from ideal pre-race preparations as a fellow passenger had to be restrained at the back of the plane.

But the mid-flight fright didn’t break her stride as she stormed to victory in Edinburgh’s Bupa Great Run on Sunday.

Kastor, a bronze medallist in Athens, said: “My flight to Scotland wasn’t the ideal preparation for a big race.

“They told us the lady suffered a violent reaction to an incorrect mixture of sleep pills and alcohol and bit the leg of an in-flight attendant. It was pretty scary.”
Police said they did not have to become involved in restraining the flight attendant’s attacker.

The 36-year-old bounced back to form after Olympic tragedy in Beijing last summer when she broke a foot three miles into the marathon, which she was hotly tipped to win.

But it was just one of a number of dramatic hurdles Kastor had to overcome to reach a ‘surprisingly sunny’ Scotland from her home in the Californian mountains with husband, and fellow runner, Andrew.

She added: “We had a six-hour drive to LA, then there was a medical emergency on board the plane to England, so we had to land and spend two and a half hours on the ground in Maine.

“It made a long journey even longer.”

Despite the drama, she dominated the capital’s 10km race in a comfortable 32 mins 38 seconds to poleaxe a strong field of international runners including three-time champion Jelena Prokopcuka.

She said: “That was a really tough course, the terrain was more like that you get in a cross country rather than a road race.

“Fortunately it is what I’m used to back home and I always run strongly on hills. So the competition was more of a threat to me than the terrain.

“My foot felt great in practices because I was so conservative before making my comeback, so I wasn’t expecting any problems.

“The only thing I was questioning before coming here was being mentally tough because I’d been away so many months.”