It’s Dundee Jim – but not as we know it 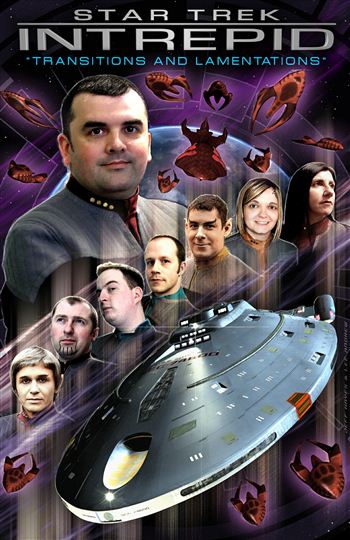 TREKKIES from around the world are beaming-up a low budget Star Trek fan-film which was shot in a Dundee tenement.

Nick Cook – a nurse at Ninewells Hospital in the city – produced and wrote the latest instalment of the Star Trek Intrepid series.

The 39-year-old turned his home into the bridge of a starship while filming the £4,000 movie, which he also wrote.

He and a cast and crew of 40 Trekkies used kitchen units and camping gear to mock up sci-fi sets while they filmed Transitions and Lamentations.

The film is the fourth movie in the Intrepid series and hit the internet last week – just a week before the new £100m Holywood blockbuster.

The 29 minute movie – which also stars his wife Lucie – was shot in his home in Dundee, at the Abbey Theatre in Arbroath and also in Glen Doll.

And Nick said American fans of the cult series are going crazy for the Scottish take on franchise.

He said: “It came out on the web around tea-time on Friday night and so far we have had about 1,000 downloads. The comments have been really good.

“We have some pretty spectacular countryside close to Dundee and it is one of the things that sets us apart.

“The US fans who see the films think the countryside is amazing.”

Theatre nurse Nick said it is the best he and a team from around the world have produced so far.

He said: “At first it was a bit of a lark, a bit of fun, what we released was not bad but this is the best we have done and is much better than the earlier efforts.

“This one looks really good and it is a nice piece of work.”

And, after originally getting some stick from workmates at the hospital, Nick said most are now impressed by the standard of work he is helping to create.

Nick said: “I kept being a fan very quiet for a long time and when it first came out a couple of years ago there was a bit of laughing.

“But generally they are pretty cool with it, although there are still some jibes they have gone from ridicule to impressed.”

Nick plays Captain Daniel Hunter in the short movie which sees an away team discover the remains of an ancient civilisation on a remote planet.

The movie can be viewed at www.starshipintrepid.net.