RANDY old birds of prey have successfully hatched a falcon chick almost a decade after they normally stop breeding. 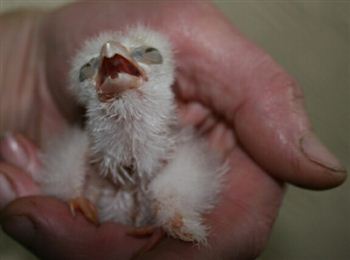 The peregrine chick was born in the early hours of Monday morning after the mother and father – both in their mid twenties – had clutch of eggs.

Peregrine falcons rarely live to beyond 20 years old and it is unusual for them to breed after 17.

Animal workers were amazed the OAPs – Old Aged Peregrines – had bred for the first time in five years but assumed the eggs would be infertile.

However they were left stunned when they heard the sound of cheeping coming from one of the clutch.

And to their amazement – and delight – a single chick hatched and is said to be “bold, healthy and happy”.

Now staff at Elite Falconry in Fife plan to rear the baby bird of prey on minced quail before returning it to its parents later this week.

Barry Blyther, head falconer at the sanctuary near Kirkcaldy, said he was delighted about the eggs but more amazed when one hatched.

He said: “The birds lay a clutch of three eggs and we thought the eggs would be infertile.

“We were just pleased that they had produced eggs at all but after 10 or 12 days one of the eggs disappeared and we decided to take them in and incubate them.

“We started to suspect that one egg was fertile and on Sunday we heard one of the eggs cheeping and it turned out the chick had started the hatching process.

“It hatched out sometime in the early hours of Monday.

“It is a strong, bold, healthy and happy chick and we are absolutely delighted.” 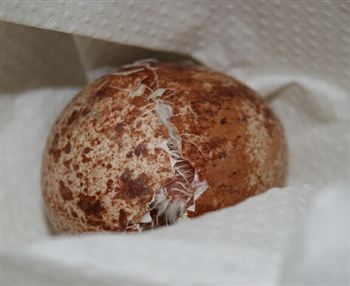 Barry said staff had given up hope of the pair breeding again after they had gone five years without mating.

He said: “A good age for a peregrine falcon is 17 or 18 years old and to have them still breeding at that age is doing really well.

“These ones are in their mid-twenties and although we have kept them in good condition the idea that they could produce eggs had passed from our minds, it was a real surprise from us.”

Barry is currently feeding the chick tiny amounts of minced quail but plans to return the chick to its rightful place as soon as possible.

“We want the chick to be parent reared but we will keep feeding it by hand until it is about four or five days old when we will return it to its parents.

“We don’t know what sex it is yet but by the time it is six or seven weeks old we should be able to tell by the size of the bird.”

Peregrine falcons are a protected species in the UK, with just 1,250 breeding pairs although numbers have increased since the 1970s and ‘80s when the bird was seriously endangered.