Rare space atlas up for grabs 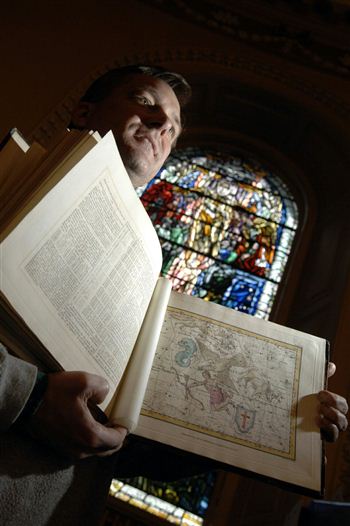 A RARE atlas of space is up for grab after being donated by a mystery benefactor.

With 30 colour plates illustrating the stars in the night sky, it is not only well preserved but also a valuable volume.

Dr Ried Zulager, an expert on antique books who flies from Washington DC every year to help with the specialist books in the sale, said he was delighted to have found such a gem.

He said: “It’s a real find. We don’t know who handed this in, but it is a wonderful gift.

“Often with these kinds of books, people rip out the plates to put on the wall, but this is complete.”

Dr Zulager explained that Alexander Jamieson was a ‘pioneer’ for combining art with science – producing accurate and beautiful maps of the solar system.

He said: “They liked to have pictures of what they imagined was in the skies, but Jamieson was the first to combine science and art.

“He was a bit of a pioneer. For the first time, the images became scientifically accurate.

“This was the beginning of professional astronomy.”

A price is yet to be placed on the precious find yet, but it is hoped that it will get snapped up along with all the other items on sale.

Sale convener Mary Davidson said: “We will put a price on it at the last minute and the first person with the money will get it.”

The annual sale in George Street started in 1974 and has raised more than £1.7 million since then.

Other rare items donated include a first edition of Outlines of Moral Philosophy by Dugald Stewart from 1793.

A major figure of the Scottish Enlightenment movement, Stewart was a professor at Edinburgh University in the late 1700s and has since had a new building on campus named after him.

There are also some first editions of the Waverly novels of Sir Walter Scott and a rare and pristine first edition of Watership Down by Richard Adams.

As well as books, the sale contains old maps, postcards, magazines, newspapers and letters dating back to both the world wars.

Triple success for graduands at a competition for new designers