Students call for Goodwin’s honorary degree to be rescinded 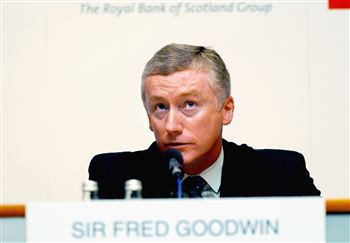 ANGRY students are calling for their university to take an honorary degree back from Fred Goodwin – claiming that he is no longer deserves it.

In 2002, Sir Fred was given the accolade by Glasgow University for his services to banking and the remarkable way in which he turned RBS around.

But now students are claiming that to be associated with him is putting a black mark on the university, and they want principal Sir Muir Russell to rescind the honour.

When he was recommended for the degree he was at the top of his field, winning Forbes’ international businessman of the year in the same year.

The campaign is being organised by James Foley who writes for their student newspaper Glasgow Guardian.

He said: “I think rescinding the degree would send out a message. The award makes the university look corrupt, decadent and elitist.

“It has now emerged that RBS made the largest corporate loss in British history, the government has had to bail them out to the tune of billions, they’re shedding jobs, and all of this is a result of the so-called services that he was contributing towards banking.

“Every student is going to care about this, and they’re going to fight back. Sir Fred Goodwin is a rapacious profit-monger who has done nothing whatsoever to help society.”

But it was a different story when he was nominated for the degree, with the university lavishing praise on the disgraced banker.

The honorary degree panel applauded his business style when they recommended him for the honour.

They said: “Having seen for himself how banking can go spectacularly wrong, Fred Goodwin obviously decided to show the business world how to do it properly…the rest is the stuff of corporate legends.

“The Royal Bank of Scotland represents one of the major corporate success stories of the last decade. In 1992 it was described by some as an ‘old and sleepy’ Scottish bank, long on history and short on drive.

“Ten years later, its stock price has risen by 1000 per cent and its market capitalisation has risen from £1.5bn to over £47bn. Fred Goodwin has played a central role in this transformation.”

Since then, the RBS share price has plummeted to two per cent of its previous value, and the Scottish bank is now state-owned.

But despite his fall from grace, Goodwin may well keep hold of his honour, as Glasgow University has never rescinded a degree in the past.

The only time a Scottish university has taken back a degree was when Edinburgh revoked Robert Mugabe’s doctorate two years ago after a student-led campaign.

With plans to circulate a petition round the university’s 20,000 students, it is hoped that Glasgow university will also listen to their students.

A spokesman for Glasgow University said they had no plans to rescind the honorary degree.

Goodwin also has an honorary degree from Aberdeen University.