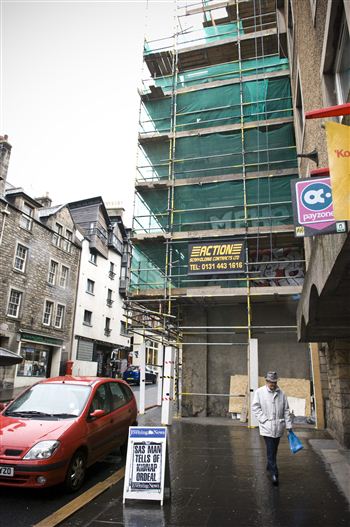 EDINBURGH’S crumbling buildings have claimed another victim after a woman was knocked unconscious by a falling slate as she walked to work.

The 30 year-old was rushed to Edinburgh Royal Infirmary following the accident which took place as rooftop repairs were being carried out along the city’s historic Royal Mile.

Work was immediately halted, but was allowed to continue after a two-day investigation in April.

The issue of the capital’s falling masonry has been in the headlines ever since an Australian waitress was killed at as she cleared tables at a West End bar in 2000.

The tragic death sparked a city-wide investigation into the state of properties in the city.

In 2006, tourists were forced to evacuate their hotel after a large section of masonry collapsed, knocking off 15ft of window railings and sending rubble crashing on to the pavement below.

Witnesses said it was “a miracle” nobody was hurt in the incident.

Early last year, residents in Canonmills escaped severe injury after tonnes of sandstone crashed to the ground outside their flats.

And in May, two incidents were reported when a chunk of masonry narrowly missed an elderly pedestrian after it fell from the city’s King’s Theatre, and a large chunk of masonry fell from a tower at the Church of Scotland’s General Assembly Hall.

The latest episode saw the woman struck on the head after the council had contracted a local firm to repair the roof of the housing block.

Mark Singh, 19, a shop worker, witnessed the woman being struck.

He said: “The woman was unconscious until the ambulance came. It was terrible. There were two or three people helping her by the time I got there, and I gave her a bottle of water. I was shocked.”

The council has now given the work the go-ahead after conducting its investigation.

A spokeswoman said: “An incident was reported to the council after a small piece of slate fell during statutory repair work, striking a passer-by.

“Standard procedure dictated that the site was closed to allow an investigation to be carried out.

“Work at the site has now resumed and the council was satisfied that there were no problems with the scaffolding or management of the site, and this appeared to be a one-off incident.”

The Scottish Ambulance Service said a 30 year-old woman had been taken to the ERI at around 8.30am on April 21 after being hit by a “building tile”.

A Health and Safety Executive spokesman said: “We will be making further inquiries.”