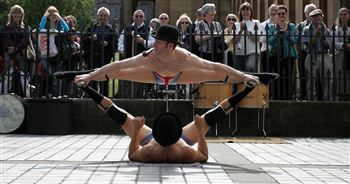 EDINBURGH’S Fringe Festival has been hit by the credit crunch – after announcing the cancellation of its biggest event.

Fringe Sunday, which regularly attracts over 250,000 people to the capital’s streets, is to be scrapped after organizers failed to attract backing for the event.

Officials have admitted defeat after nine months of trying to secure the finance needed to hold the parade.

The news comes just days after it was revealed the festival’s traditional curtain-raiser is to be relocated from Princes Street due to the ongoing tramworks.

Organisers of the Festival Cavalcade have promised to fill the gap of Fringe Sunday by offering performers the chance to perform on the afternoon of the parade.

The cancellation of the event is the latest problem to hit the festival after the Fringe comedy award lost its headline sponsor when Intelligent Finance decided to pull out.

Soaring costs and a lack of sponsors are being blamed for the latest developments.

In 2007 the event was rescued by HBOS after they staged a last minute rescue bid and last year the Fringe had to effectively finance the event themselves.

It was revealed in January that festival bosses had ordered a review amid fears the event was proving too expensive.

Fringe Sunday was first staged in 1981 on the capital’s High Street before relocating to Holyrood Park due to overcrowding.

It was staged there every year until 2001 when it moved again to the Meadows, again to accommodate more spectators.

A Fringe spokesman said: “We’ve been trying to secure a sponsor for several months but, despite constructive discussions with a number of potential backers, we’ve unfortunately been unable to do so.

“We have to stress that this decision only relates to this year’s event. It is not cancelled indefinitely.”

David Todd, director of Festival Cavalcades, admitted his event has experienced sponsorship difficulties and has been forced to scale back his plans.

He said: “We have been informed of the Fringe’s decision and will be doing our best to fill the gap.”

Fringe bosses are still recovering from last year’s box office fiasco which forced the resignation of the then director, Jon Morgan.