The View help save The Doghouse 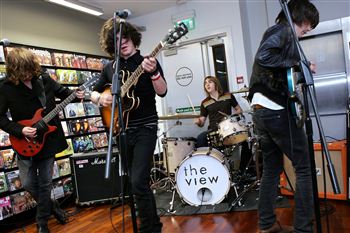 THE VENUE which helped launch Scots rockers The View is to reopen after the band helped it raise thousands of pounds.

The Doghouse in Dundee was forced to close in March due to mounting debts, but its walls will be rocking again after the Hats Off to the Buskers stars helped out.

The band appeared at the city’s Fat Sam’s last week in a successful fundraising mission.

And the venue will mark its reopening this weekend with a two night musical extravaganza.

Licensee Sarah Hill was forced to shut the Doghouse doors after legal proceedings were brought against her.

Ms Hill was sequestrated by Dundee City Council for unpaid business rates and insolvency administrators moved in to take over the premises.

The closure of the popular music bar prompted local bands, including the pop-punk four-piece, to rally round and offer their services to help pay off the £8000 debt.

Ms Hill, 37, was said to be “ecstatic” that the venue has been saved.

She said: “To have pulled it off is amazing. We’ll be in doing a clean up and are all just really excited to be to be back in place.

“It just shows you that, with a lot of hard work and determination, you can achieve anything.

“The support from everyone including bands, local businesses, our customers and public has truly been overwhelming and will not be forgotten.

“Having The View on the bill really pulled the rabbit out of the hat for us and it played a major part in us getting here.”

The View last took to the Doghouse stage last Hogmanay when the played the venue’s New Year party.

The View line up summer festivals

Kieran Webster, The View’s bass player, said: “We were just glad we could do something. Sarah helped us when we needed it and we were pleased to be able to give something back.

The band are due to play three large shows next weekend in Glasgow, Manchester and London before appearing at the Isle of Wight and T in the Park festivals later this summer.