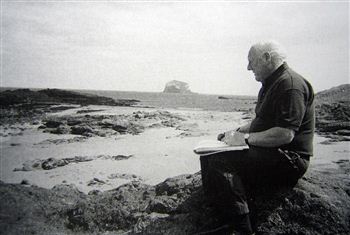 A SCOTS artist once considered one of the country’s finest post-war landscape artists has left his entire £3million fortune to his wife.

But John Houston OBE plans for organizations supporting artists to eventually benefit from his works.

Mr Houston, who was born in the small Fife town of Buckhaven and was once capped for the Scottish international U-21 football team, passed away aged 78 last September.

Included in his legacy is his share of the family home in Edinburgh valued at an estimated £750,000, cash, shares and investments worth over £1 million, as well as his prized Mercedes Benz motorcar.

Throughout his life he continually championed art in his home country, collected scores of awards and titles, and was known for his intense, atmospheric landscapes exploring the dramatic effects of weather and light.

Houston’s work is characteristic of modern Scottish painting, and although his remarkable paintings of the Bass Rock in the River Forth have become a theme for his art, he is also recognised for his exciting studies of flowers.

The philanthropic artist’s bequest reveals he has left his entire fortune to his wife Dame Elizabeth Blackadder DBE – herself a respected artist, and the first woman to be elected to both the Royal Scottish Academy and the Royal Academy.

Donating all his work

But his will also stipulated that if Ms Blackadder had predeceased him, the bulk of his estate would go to various art organisations, including The Society of Scottish Artists and The Royal Society of Painters in Watercolours in Scotland.

Eventually, Mr Houston wants the Royal Scottish Academy in Edinburgh to receive his and his wife’s entire collection of artwork, which includes hundreds of paintings, watercolours, sketches and sketchbooks.

His estate also revealed the artist was a keen investor, and one who kept a close eye on the markets.

Born in Buckhaven, Fife, but brought up in nearby Windygates, John Houston studied at Edinburgh College of Art between 1948 and 1954, and took up a travelling scholarship to Italy before returning to teach at the college.

His father owned the local shop in the small Fife town and, among other things, dealt in the sale of horses. Houston would ride for his father at race meetings throughout the country including the course at Musselburgh.

At Buckhaven High School, he was successful both academically and at sport, especially football, which was to play a large part in his early life.

He won an under-21 international cap, playing for Scotland against England as an outside-left, and went on to play as a part-time professional with Dundee United while at art school.

A serious injury to his knee put a stop to any thoughts of a football career, and a subsequent eye injury excused him from national service. 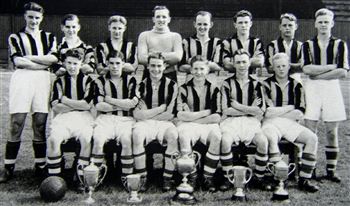 He then spent five years at the Edinburgh College of Art, leaving in 1953 with a postgraduate travel scholarship, which took him to Italy for the first time.

The young Elizabeth Blackadder was a near-contemporary, though it was not until towards the end of his time at Edinburgh that they became close.

The pair were to prove inseparable and were married in Edinburgh in 1956.

They both began teaching at the art college, and among Houston’s students was a young John Bellany CBE, who himself would go onto world-renown as a talented figurative painter.

Alistair Hamilton, 65, owner of the Harbour Gallery, Port Seton, East Lothian, was also in the same Houston-taught class as Bellany.

He said: “I remember John Houston very well even though we haven’t spoken for many years. He was one of the finest tutors we had and was such an amiable man.

“He always encouraged you in whatever field it was you were interested in, and always had time to chat and look over your work.

“John was extremely talented and his skyscapes and Bass Rock paintings are among the best I’ve ever seen.

“It was a sad loss, not only for Scottish art, but for art in general, when he passed away last year.

“I’m sure he will be fondly remembered by everyone who came into contact with him.” 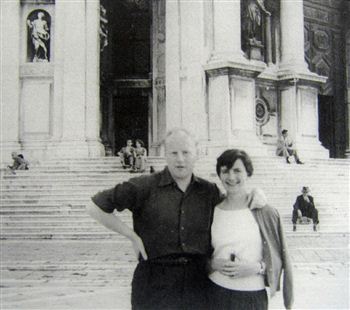 And Professor Karen Forbes Visser, Edinburgh College of Arts’ Head of School of Drawing and Painting, said: “As two young artists Houston and Blackadder met during their studies at Edinburgh College of Art and have pursued individual artistic practices as husband and wife ever since, working alongside each other in many different countries, sharing a deep appreciation of their explorations and travels together.

“Painting was the vocabulary through which John articulated his passion for land and sea.”

Houston and Blackadder travelled extensively on working trips abroad – latterly to Japan, France, and Italy, and especially to their much-loved Venice.

He was regarded by his close friends to be a most generous host, dangerously so when it came to his beloved malts and Burgundies.

At times he was said to be gruff and outspoken, but was also considered genial and sympathetic.

Mr Houston was appointed OBE in 1990.