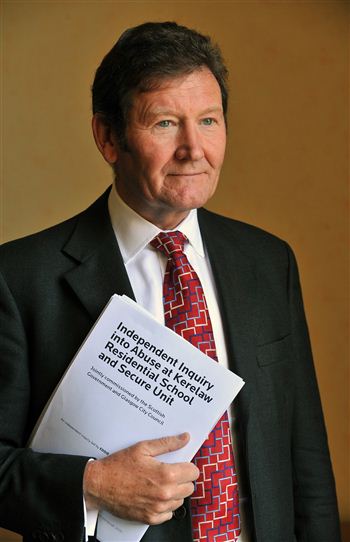 MANAGEMENT failure, poor training and a “macho” culture are among the damning criticisms raised by an official Scottish Government report into the Kerelaw abuse scandal published yesterday.

The Ayrshire residential unit faced hundreds of alleged cases of sexual and physical abuse from its former pupils dating back to the early 1990s.

Pupils’ claims ranged from suffering sexual abuse to being restrained by “bouncing somebody off the wall, twisting their arm up their back or putting pressure on joints”.

In 2006, Matthew George, 56, an art teacher, was jailed for 10 years at the High Court in Edinburgh for a “horrifying catalogue” of 18 offences connected to Kerelaw abuse.

The official independent report into the scandal, released in Edinburgh yesterday, concludes the abuse of children did take place within the grounds of Kerelaw, and that “physical abuse [by staff] was prevalent”.

It heavily criticised staff training and, in particular, the lack of proper training concerning the staff’s implementation of Therapeutic Crisis Intervention techniques which “contributed to poor practice that was often abusive”.

The report also finds the circumstances that allowed the abuse to flourish were due to a complex mix of cultural factors, including an over-emphasis on control.

There were cliques, factionalism and inappropriate relationships among staff which inhibited change, while there was also a lack of strategic direction, both in Kerelaw and in Social Work HQ, it said.

Glasgow City Council’s system for performance management and the supervision of its staff was also found to be “inadequate”.

They include improving staff training, rigorous follow-ups to inspections, improving management and leadership capabilities and a more effective investigation and disciplinary process.

Mr Frizzell said: “The main problems at Kerelaw were to do with the culture and its limited capacity to change that culture. Basically, there were management and leadership failures that were present for a number of years at both Kerelaw and Glasgow City Council.

“There was a huge lack of continuity at a high level and to some extent the ethos at Kerelaw was “out of sight, out of mind”.

“The culture, which had its roots in a List D fairly control-focused culture, had a degree of, I won’t say violence, but, of robustness which was regarded as alright in the 1980s but was not acceptable in the 1990s, or indeed now.
“Unfortunately, Kerelaw did not keep up with that change. The abuse sustained covered a wide spectrum.

“The picture we built up was one of a controlled macho environment – the word macho got used time and time again by staff.”

The report also found the complaints system in place for pupils at the time was “inconsistent and poorly monitored”, while there was little follow up from fact-finding investigations of young people’s allegations.

Local government re-organisation was also blamed for creating serious financial problems for the Council and for distracting its senior managers from the real issues at Kerelaw.

Poor professional relationships at senior level in the Social Work Department were also blamed for the appalling behaviour which went on at the residential home.

The Council’s investigations from 2004 onwards were said to be “robust”, but could have been better handled, and would have benefited from closer quality control of documentation.

Overall, the report finds there was a significant failure in leadership and management that led to the relative neglect of Kerelaw and, as a consequence, the abandonment of those who lived and worked there.

That failure did not only occur only in Kerelaw’s final years, but is said to have grown over many years under changing circumstances and different management regimes.

Glasgow City Council closed the secure unit in Stevenston, Ayrshire, which catered for some of the most troubled and troubling young people in Scotland, in March 2006 after conducting an investigation into the abuse claims.

The enquiry has lasted a full three years and has resulted in 29 disciplinary hearings, and as a result of the investigations and disciplinary processes 14 staff were dismissed.

Two of the dismissals were subsequently deemed unfair by Employment Appeals Tribunals, and the Council was forced to withdraw its defence in the case of another two.

A further outcome of the investigation resulted in 31 ex-Kerelaw employees being referred to the Disqualified from Working with Children List.

Children’s Minister Adam Ingram welcomed the report on the independent inquiry into abuse into at the former Kerelaw residential school.

Mr Ingram said: “All of the young people who attended Kerelaw deserved absolute care and support to help them overcome any difficulties in their lives and move towards a bright future. We regret that for some that wasn’t the case and that is not acceptable.

“While the recommendations in this report primarily concern Glasgow, the Scottish Government has fully taken on board all those with implications at a national level and it’s clear that this report must also be considered carefully by all providers of residential care and local authorities who place children.”

Liz Smith MSP, Conservative Shadow Minister for Children, said: “We welcome the findings of the report as proof that far too many of our most vulnerable young people were being let down by a defective system and by the very people in whom the youngsters had placed their total trust.

“Major lessons have to be learnt from this so that such abuse can never happen again.”