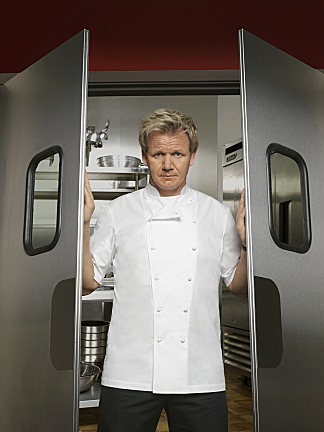 FOUL-MOUTHED telly chef Gordon Ramsay has been slammed by television watchdogs – for swearing too much.

The Scots chef has been censured for swearing an incredible 78 times in just 20 minutes during an episode of Ramsay’s Great British Nightmare.

The two-hour episode, which was screened on Channel 4 on January 30 this year, received 51 complaints from viewers objecting to the frequency and sustained nature of the f*** word.

Ofcom noted that the first two parts of the programme contained “115 instances of the most offensive language”.

And in one scene, a chef could be seen berating his boss by using the f*** word an unbelievable 30 times in under two minutes.

The watchdog said much of the offensive language was delivered in an extremely intense and at times aggressive manner and could be considered “gratuitous” and “unreal”.

But, the TV regulator did say in the case of programmes featuring Ramsay, the context was important given his “well-known reputation for using offensive language”.

Ofcom received 51 complaints which came mainly from regular viewers of the show.

One said: “I am a great fan of Gordon Ramsay, but there was far too much swearing in this programme. It was embarrassing and rude and I had to turn it off.”

While another viewer added: “For the first time ever, I find myself totally shocked and unable to actually watch the show due to the use of the words “F***”, “F***ing” and “S***”.

“There seems to be a swear word almost every other word. I am 45 minutes into the show and I’m afraid I’ve had enough.”

Channel 4 bosses have hit back at the reprimand by claiming Ramsay “upholds the interests of restaurant goers throughout the UK”.

They argued that “such a high volume of strong language is not exceptional and would not have been beyond the expectation of a returning audience”.

But Ofcom found the broadcaster and the chef had breached Rule 2.3 of the watchdog’s code which covers the accepted standards broadcasters have to adhere to.

The regulator concluded “that it (the swearing) was not warranted since there was not sufficient editorial justification or context in this programme for the level and intensity of swearing in the first two parts of the programme”.

In the first 40 minutes of the show Ramsay used the word “f***” 115 times, with 78 of the expletives being aired during a 20 minute segment.

Based on Ramsay’s Kitchen Nightmares, the programme follows the celebrity chef as he takes on failing restaurants and attempts to turn them round.

In his own inimitable style, Ramsay tackles poor management, inferior cooking and unacceptable standards of hygiene from restaurants across the Britain.