Kirk to send virtual vicars on Internet highway to Heaven

CHURCHGOERS could soon be worshiping God using the Internet highway to Heaven.

A plan by Kirk ministers to deliver virtual sermons to solve a staffing crisis is on track to gets the thumbs up. 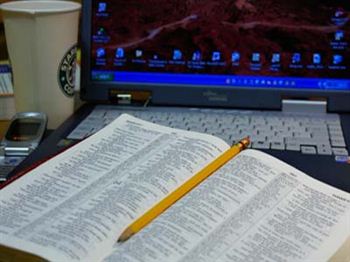 Struggling Church of Scotland elders say there is a huge shortage of clergy in their rank and file with some 190 vacancies currently on offer.

Now a proposal is to be put to this year’s General Assembly calling for trials of using web-cams to host online -sermons to reach the masses, particularly those in outlying and difficult to reach areas.

The idea – first proposed by the Ministries Council after talks with the Mission and Discipleship Council – would centre of those churches struggling to attract full-time ministers.

It would see virtual vicars tour a different Scots island every week to preach and beam the service to others logged into a Holy network.

The proposal says: “The Council continues its work in seeking new and more flexible ways of deploying ministries, and other plans include secondment and transition ministry.

“Under the secondment scheme, churches that have been without a minister for more than a year would be entitled to invite a preacher, already attached to another charge, for a placement of one to three months to help relieve the pressure on supply leaders.

“Transition ministry aims to provide preaching to congregations experiencing long-term vacancies and which are often missing the very leadership they need to adjust to a radically different future.”

Under the plan the mobile missionaries would be deployed to the worst hit areas for between three and five years.

A Church spokesman said: “The report acknowledges that often rural and island Presbyteries find it difficult to attract ministers.

“If successful, the scheme could offer benefits to those in rural and island churches without a full-time minister.”

Is this Scotland’s most heavenly home? Former Victorian gothic church on sale for £650k

Irn Bru heaven is in Stenhousemuir as shopkeeper reveals his 5,000-litre stash of original recipe