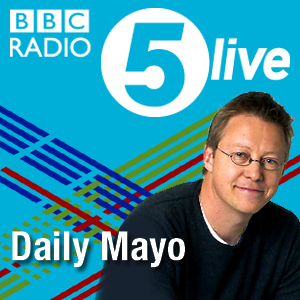 AWARD-WINNING broadcasters Mark Kermode and Simon Mayo are bringing a special edition of their Film Review radio show to Edinburgh.

The Radio 5 Live presenters have revealed the next leg of their show will open the Edinburgh Film Festival in June.

The pair are fresh from winning the Speech Award at the prestigious Sony Gold Awards on Monday– the radio industry’s equivalent of the Oscars.

This will be only the second time the radio couple will have taken their show on the road after the spectacular success of their Leeds show in March.

Simon Mayo said: “The good doctor (Kermode) and I have been disagreeing about the latest film releases for approaching 20 years, and I’m thrilled that we are getting the chance to do exactly the same in front of a live audience in Edinburgh.”

The two movie buffs have been reviewing films for almost two decades after striking up a friendship during their time at Radio One.

They will be broadcasting live from the capital to discuss the week’s big releases and to take questions from an audience of Five Live listeners.

With around 100,000 downloads every week, the Film Review is Five Live’s most popular podcast, and the Edinburgh show is expected to be shown live on the internet.

Mayo, 50, presents the weekday afternoon show on Radio Five Live. Last year he was recognized as the “radio broadcaster of the year” at the 34th annual Broadcasting Press Guild Awards.

After 15 successful years with Radio One, Mayo joined Five Live where he has remained ever since.

The Film Review road show will be appearing at the Cineworld Cinema, Fountainpark, Edinburgh on June 19.