A CALIFORNIAN top cop has heaped praise on Scottish police forces, saying that Scots should be “very proud” of their work.

Jim Bueermann, chief of Redlands Police in California, said that Southern California and Scotland share many policing issues, and that his department could learn a lot from how Scots police go about their business.

Mr Bueermann was making a stop at St Leonard’s Police Station in Edinburgh as part of a visit to Scotland to discuss community-based policing, and was later due to visit officials at the Scottish Parliament.

He said: “I think that the people of Scotland should be very proud of their police force.

“While there are always going to conflicts between communities and the Police, like there are in the United States all the time, it has been my impression that these are very professional people.

“They are very knowledgeable about policing issues – I’ve been given many examples of their policing practices which are very beneficial to my colleagues and my department.

“I’m very proud of them, and proud to call them brothers and sisters in the world of policing.”

The US chief is well known in the United States for his holistic approach to policing – in 2001 he addressed a national policy convention organised by former Vice President Al Gore.

Chief Bueermann specifically plans to discuss mapping and Geographic Information Software (GIS) with senior officers from across the country.

The software allows police to plot the location and time of every crime committed on a map, enabling hotspots to be pinpointed and resources allocated accordingly. 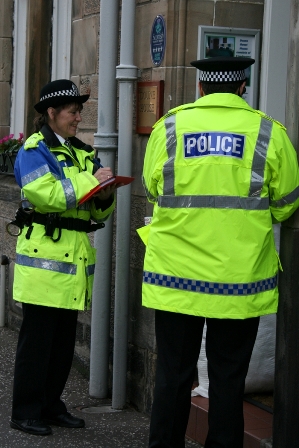 He said that he is keen to try to understand the role that “place” plays in controlling crime and disorder problems – knowledge that he hopes to share with Scots police.

He said: “In Southern California, the issues of drug use, violent crimes and adolescent problem behaviour are things which we deal with every day.

“Although my understanding is that Scotland has a lower rate of violent crime, we’re all trying to create safe environments for people to grow up in, whether that’s in Scotland or Southern California.

“How we get to that point is something that the Scottish police can give us many lessons on, and I intend to learn those lessons.”

Chief Bueermann, who has been head of the Redlands Police Department, will address a conference of Scottish Police Superintendents (ASPS) on 14th-15th May at the Westerwood Hotel in Cumbernauld.

10 Laws to Know If You’re In California