A TEACHER who pulled a gun on a teenager after being beaten-up by a gang has escaped a jail sentence. 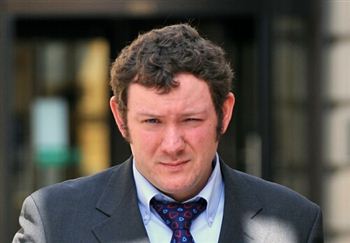 Allan Dickson, 32, fired several shots from a gas powered air pistol – capable of killing – from outside his Edinburgh home following a drunken night out.

Dickson – who has been suspended from his teaching post – claims he let his “heart rule his head” after being set-upon by a gang while he made his way home from a work’s do.

Terrified Scott Melvin – who Dickson claims attacked him – had to run to safety before he reported the weapon-wielding man to police.

A neighbour who heard the disturbance talked the shamed sir into handing over the weapon before police collected the pistol and arrested Dickson.

But at Edinburgh Sheriff Court he was fined £1,000 after earlier admitting two offences under the firearms act.

The court heard how Dickson had been on a boozy day out with workmates on July 3 last year and got home just before midnight when he ran into Mr Melvin, 18, in Granton Mill Drive.

Fiscal depute Alasdair MacLeod said: “An altercation took place between Mr Melvin and the accused and it may well be that Dickson was assaulted.

“Mr Melvin went to a friend’s house where he stayed for a short time before going home, which passed where the accused lived.

“He saw the accused in his garden pointing in a manner which suggested he was holding something.

“Mr Melvin heard a shot fired and realised that the accused had a gun. He then ran to a friend’s house where he stayed for 10 to 15 minutes.

“On the way he stopped a police car and told the officer what had occurred.”

Mr MacLeod said that a neighbour of Dickson’s had also seen him with gun and had taken it off him before getting him home.

He said: “The accused was crying and saying that he had been beaten up. He fired three or four shots into the ground before he handed the gun over to this witness who put it in her home and took the accused home.

“She said that the accused was very drunk and she had never seen him like that before.”

Police interviewed Dickson and he said he had tried to scare Mr Melvin off after being beaten-up by a gang.

Mr MacLeod said: “He said he had arrived home about midnight and was leaving a taxi when he became aware of about eight males who were approaching him and calling him names.

“He detailed an assault on himself and said he then got the air pistol and admitted discharging a number of shots into the air and into the ground.

“He said in his interview it was his intention just to frighten them.”

Mr MacLeod said the 45mm pistol was powered by carbon dioxide and held a cartridge of eight shots.

He added: “The pistol is sufficiently powerful to be described as a firearm. It has the potential to cause lethal injury.”

Dickson’s solicitor, Fiona MacDonald, said because of the end-of-term staff night out, her client had drunk more then normal.

“Following on from the assault he took the extremely foolish decision to go into his house and retrieve this air pistol.”

Miss MacDonald said no shots had ever been fired at Mr Melvin and Dickson had “let his heart rule his head” following what he had seen as a humiliation.

Dickson, Miss MacDonald added, would now be subject to disciplinary proceedings and could face a ban from teaching.

She said: “He is in a position of serious uncertainty as to his future.”

Sheriff Derrick McIntyre said: “You’re a first offender, the gun was not fired at this youth, there was a lead-up to this, and you were assaulted by them.”