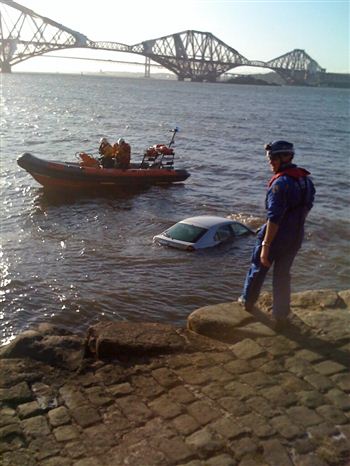 A NURSE celebrating her birthday has been hailed a heroine after pulling her elderly father from his car after it plunged 15 feet into stormy seas.

Robert Wilson, 79, from Accrington, near Manchester, was visiting relatives when he took daughter Philippa Fielden and her two Australian friends for a Forth Bridge sightseeing trip.

But the visit almost turned to tragedy as Mr Wilson tried to negotiate a tricky three-point turn at Long Craig Pier in South Queensferry on Tuesday at around 6pm.

The automatic silver Ford Mondeo suddenly careered forward off the pier and dropped head first into the water with all four still inside.

The car’s electrics were affected leaving Mr Wilson trapped in the driver’s seat, but luckily Mrs Fielden and her friends managed to open their doors.

The brave 44-year-old children’s cancer nurse then managed to grab her trapped father as he sat panicking and pulled him across the passenger seat and out to safety.

By the time coastguards and a lifeboat crew arrived on the scene, after an emergency call from a member of the public, all four were standing safe but wet on the pierside.

Mr Wilson, a retired electrical engineer, was taken to Edinburgh Royal Infirmary as a precaution suffering from shock, but was released soon after.

Mrs Fielden was celebrating her 44th birthday during her trip and was staying with her sister Stephanie Reid in the West Lothian town.

Mr Wilson and his wife Margaret had travelled to South Queensferry from their Lancashire home on Saturday to help celebrate their daughter’s birthday. 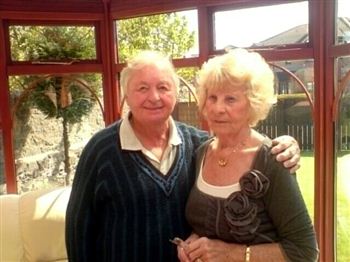 Recovering at his daughter’s South Queensferry home yesterday, Mr Wilson said: “I’m still not really sure what happened. It has been said my foot slipped off the pedal, but that is not true.

“I was panicking a bit when we went in, but luckily everyone is alright.”

Daughter Stephanie Reid and her husband David received a call on Tuesday evening saying their father had been involved in a car accident.

Mr Reid, 48, said: “We just thought it had been a bump with another car, but when we got to the pier all I could see was Robert’s car roof poking out of the water.

“My heart sank as I really expected the worse.

“Fortunately, I quickly spotted all four standing safely on the pier a bit wet and bedraggled. It could have been so much worse.

“To be honest, this is the first accident Robert has ever had in his car, but it did give us all a bit of a fright.

“When they were in the water Robert could not open his door and Philippa managed to grab him and pull him across the passenger seat to safety.” 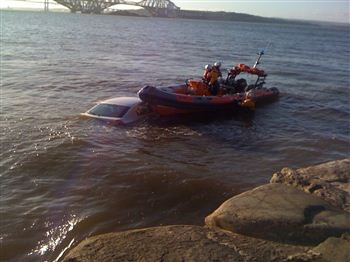 Mrs Fielden, a Paediatric Oncologist, and her two female friends all live in Brisbane, Australia, and are in Edinburgh on a nursing course financed by the Brisbane Children’s Hospital.

Tom Robertson, 67, the Queensferry Lifeboat Operation’s Manager, said: “We received a call at 18.43 on Tuesday evening and we arrived at the scene ten minutes later.

“All the occupants of the car were safely on the pier when we arrived. The car was still floating but it was submerged up to the roof.

“They were all quite lucky because it was very choppy out there and I estimate we were facing Force 4 winds.

“Two of our crew went and managed to secure the vehicle, before the coastguard winched the car in.

“Thankfully, everyone concerned is safe and well – that is the main thing.”