Pair of rescued baby owls were ‘left for dead’

By Michael MacLeod and Oliver Farrimond

A PAIR of fluffy owl siblings were almost crushed to death when jackdaws built a nest on top of them.

The tiny Tawny chicks had their nest engulfed when the larger birds decided they made for perfect soft bedding.

But the plucky birds were rescued by animal experts from the Scottish SPCA, who said they found them “left for dead”.

They have been fondly named Fiona and Greig, after the senior animal rescuer who saved them, Fiona Greig.

They are said to be recovering well after being buried under almost a foot of new bedding at a falconry centre in Cumbernauld.

The birds had to be hand-reared at the Scottish SPCA’s Middlebank wildlife rescue centre until they became more confident.

Manager Colin Seddon said: “The Tawny owl chicks have made great progress in the three weeks they’ve been here and are now looking fantastic.

“We hand fed them when they first arrived and have now moved them into the aviary where we are giving them space to develop and become independent owls.

“They are now feeding themselves and showing all the signs that they will be ready to return to the wild in the not too distant future.” 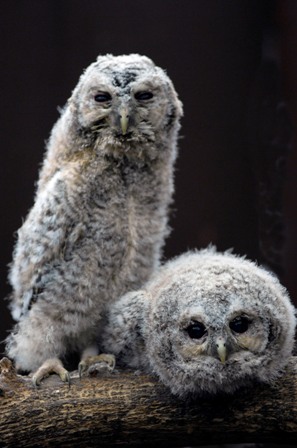 The birds will be released once the experts judge them to be of a suitable weight and condition.

And the pair have been joined at the Fife rescue centre by a third young Tawny owl, which was found on a footpath at the base of a tree.

Mr Seddon said it was normal for young chicks to struggle if their nest had been disturbed, and had important advice for anyone who finds any.

He said: “Tawny owls are nocturnal and very common in Scotland. They are often found near public habitation, and they’re a very common baby for us to get in.

“The best thing people can do if they find one is leave them alone. To look after baby owls you need special feed, special skills and special aviaries. If you do find one, call the SSPCA immediately or place the owl somewhere safe, like in a tree.”

“Adult owls will often get mobbed by smaller birds if they’re out in the daytime, because they’re rightly seen as predators. However for a nest to be disturbed in this way is very unusual.”

“We get a lot of Tawny owls – we had 30 last year, and it’s common for us to have to deal with distressed youngsters in this way.