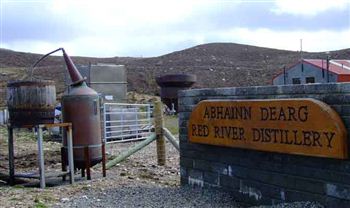 THE SCOTTISH islands made famous by the movie Whisky Galore! are to have their very own distillery – almost 200 years after the last one closed its doors.

Abhainn Dearg Distillery is the first legal whisky supplier to hail from the islands for 170 years, and the company is due to unveil a small selection of its spirit later this month.

Their single malt whisky is currently maturing in barrels and will be available for sale in two years time.

Based in Uig on the Outer Hebridean Island of Lewis, the tiny distillery is the most westerly whisky producer in the UK.

Distilling history on the island goes back to the early 1600s, and the last legal Hebridean distiller, Stornoway’s Shoehorn Distillery, closed for business in 1840.

The Shoehorn Distillery was owned and operated by former-Laird Sir James Mathieson, a teetotaler and reputed-opium baron, who built Lews Castle on the site.

But today, islanders say the Hebridean whisky production did not stop with the closure, but that it went “back to its roots”.

The £500,000 Abhainn Dearg Distillery, also known as the Red River Distillery, is using the age-old traditional methods of using copper, wood and homegrown organic barley to produce their whisky.

Entrepreneur Mark Tayburn, 41, is opening the new venture on the grounds of an old salmon hatchery, situated on the banks of the Red River.

The Lewis businessman  hopes to have his first bottles of whisky available for sale in 2011 when the Royal National Mod is due to return to Stornoway.

Mr Tayburn, who has studied whisky production for years, said: “There is a history of whisky producing on the islands going back over 500 years, but it has taken a long time to get the first legal distillery again. I am glad I have done it.

“Most distilleries, with the exception of one or two, have shifted to stainless steel, computerised systems for competition reasons.

“I am different – I am staying faithful to the hands-on, cottage industry ways.

“This distillery is about putting quality back into Scotch whisky using traditional methods and with the purest water and barley.”

Written by Compton Mackenzie, Whisky Galore is a novel that was also turned into a 1949 Ealing comedy, and tells the tale of the real-life 1941 shipwreck of the SS Politician, off the island of Eriskay.

The famous story of how a group of local Scottish islanders raided a shipwreck for its consignment of 24,000 cases of whisky has grown into legend, and some of this whisky was salvaged 50 years later and marketed in the United States.

Official files released recently by the Public Records Office show the ship was also carrying nearly 290,000 ten-shilling notes – which is the equivalent of several million pounds at today’s prices.

The hilarious film stars famous Scots actors Gordon Jackson and James Robertson Justice, along with the novel’s author who took on a small part as Captain Buncher.