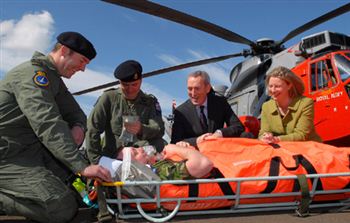 THE Defence Secretary John Hutton yesterday admitted that the MoD had a “responsibility” to help war veterans injured or traumatised while fighting the UK’s war on terror.

He claimed there had been huge improvements in ensuring equipment and kit reached the front line despite a damning National Audit Report slating the time it takes to ensure supplies reach boots on the ground.

But on a visit to a medical centre at Redford Barracks in Edinburgh yesterday, the Minister warned Britain had to gear up for a long-haul in Afghanistan and ensure health care is available for the casualties that will follow.

Describing medical help for the armed forces as the “best in the world” he said the MoD was working to improve after care for the veterans who have returned from Afghanistan suffering from both physical and mental health issues.

He said: “This war could last a long time and we can’t just walk away from them and say it’s a part of military life.

“We are responsible for looking after those who have suffered mental trauma while on duty.

“We are determined to do everything we can to improve welfare of veterans and that commitment will continue.”

He spoke as the National Audit Office claimed the Ministry of Defence is struggling to get equipment and supplies out to frontline troops in Afghanistan – saying just 57 per cent reach them within the allocated time.

“We have seen a huge improvement in kit and equipment and we are getting it out there in record time.

“We are doing everything we can and anywhere it is possible to make improvements we are making them.”

He was accompanied yesterday by Scottish Public Health minister Shona Robinson and met with patients and staff at the Redford Barracks medical station in Edinburgh. 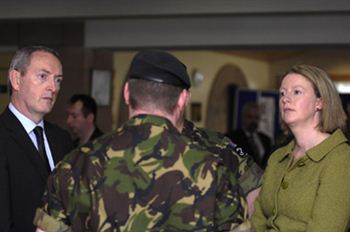 They were given a tour of the physiotherapy facilities as they launched the Military and Civilian Partnership awards – being held in Scotland this year for the first time.

Mr Hutton heaped praise on the treatment on offer to the troops on the front line and at base while chatting with patients in the medical centre who were receiving treatment for injuries received while on duty in Afghanistan.

Among them was Lance Corporal Leah Lewis, 25, who was hit by a 26-ton Mastiff truck while on patrol.

She said: “People can hardly believe that big truck has gone over me and I am still here to tell the tale. But the medical care as soon as it happened was really very good. The team was straight there and I was flown to Camp Bastion.

“Everyone at each different stage of my recovery has been brilliant. I love my job and all of these people have helped me to reach my full strength again so I’m very grateful.”

Lance Corporal Darren Bonnar, who had to have an operation on his knee after a fall, added: “The medics and physio staff give you encouragement and confidence at a time when you are feeling pretty low and just want to get back out there.”

During the tour the ministers were introduced to officials from the Army, Navy and RAF.

They were shown a typical front-line medical tent, ambulances and their equipment and were taken aboard a rescue helicopter.

Mrs Robinson said the link between the armed forces and NHS in delivering treatment was clear.

She said: “This is true partnership.

“Our forces and veterans receive superb care from our NHS, while increasing numbers of doctors, nurses and other health professionals employed in the NHS are using their skills as military reservists – which is turn benefits the care they offer on return to our hospitals and health centres.

“Each and every one of them deserves our thanks and the awards ceremony gives these often unsung heroes credit they deserve.”

Mr Hutton admitted that although the care was not perfect, he was working closely with the armed forces to ensure improvements were being made.

And he said that the medical care on offer in the UK was of the highest standard, lavishing praise on the medical staff.

He said: “These awards celebrate the achievements of the unsung heroes in the military and NHS delivering outstanding medical care to our Armed Forces.

“I am proud to say that wherever our personnel are they are supported by some of the most skilled and dedicated physical and mental health care professionals in the world.

“I think we have one of the best services in the world. These people are exceptional, we are so lucky.

“The things they do for us makes the hairs on the back of my head stand up.”

The MCHP awards ceremony will take place at Hopetoun House Hotel in West Lothian in October.