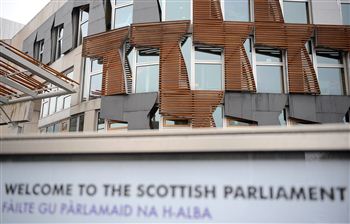 THE Scottish Parliament was at the centre of a new expenses row yesterday after spending £50,000 on kitting out the Holyrood building with brand new tables and chairs.

Most will be placed in the public café, the waiting area in the main entrance and outside the members’ restaurant.

Fifty-two black tub seats and 13 tables that have been purchased for the garden lobby cost almost £17,000 alone.

But rather than worry about the costs – MSPs say they are furious they’ve had to wait so long.

David McLetchie MSP said: “It would have been desirable to have got the seating right from the start.

“All furniture eventually needs replaced, but if we’d chosen better in the first place, we might not be renewing it after only five years.

“If these chairs are better suited for people with mobility problems, that’s something we have to take into consideration.”

Christine Grahame is one of the MSPs who use the garden lobby area a lot and also lashed officials.

She said: “It would have been good if we’d had them in the first place.

“The old chairs were difficult to get out of and people used to go and get chairs from the canteen instead.”

But the old furniture won’t be thrown out – instead it will be moved to other areas of the building including meeting rooms and corridors in the MSP block.

A parliament spokeswoman said the new chairs increased seating capacity by 50 per cent in some areas popular with visitors and staff around Holyrood.

She said: “We have increased the seating capacity in the garden lobby by more than 50 per cent.

“This is one of the busiest parts of the building and on business days in particular there can be a shortage of seating.”