Queen Victoria’s brooch to go under the hammer 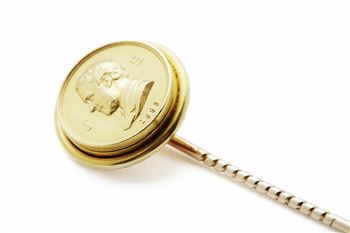 A PIN commissioned by Queen Victoria in memory of her gillie John Brown will go under the hammer later this year.

It is expected to reach £700 in the Scottish Sale which will be held in the capital on the 18th of August.

John Brown died in 1883 when he was 56 years old, and the Queen commissioned an Aberdeen jeweler to create a brooch in his memory.

They were then given to the Queen’s highland staff and cottagers so that they could wear them on the anniversary of his death along with a mourning scarf.

Now in the hands of a private collector, the gold brooch has Brown’s head on one side and the royal monogram on the other.

John Brown was a constant presense at Queen Victoria’s side following the death of Prince Albert in 1861.

He went from being a gillie to becoming her personal servant, and attracted a lot of resentment in the process.

It is known that he constantly clashed with Victoria’s son Edward, who went on to destroy most of the memorials and stautues that had been made in Brown’s honour after his death.

And his death hit Victoria hard, although she went on to have an equally close relationship with Indian servant Abdul Karim after Brown’s death.

Before her death in 1901, she asked the doctor to place a lock of John Brown’s hair, his photograph and a ring her gifted her in her coffin.

Depite all the disdain for Brown in court, Queen Victoria is reported to have described him as holding “all the independence and elevated feelings peculiar to the highland race, and is singularly straightforward, simple minded, kind hearted, and disinterested, always ready to oblige, and of a discretion rarely to be met with.”

The story of the Queen’s relationship with her gillie was famously brought to life in the 1997 film Mrs Brown, which starred Billy Connolly as Brown and Dame Judi Dench as Victoria.

A spokesman for Bonhams, the auction house that is selling the pin said: “The brooch has such a strong connection with Scotland and it fits right in with our Scottish Sale.”