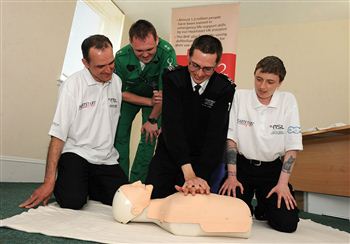 TRAFFIC wardens and Blue Meanies are usually the bane of driver’s live.

But under new plans the loathed enforcers could be the difference between life and death.

Parking attendants are to learn how to treat people in emergency situations with basic first aid techniques such as mouth-to-mouth resuscitation and CPR.

Wardens in Edinburgh, who are the first in the UK to participate in the scheme, have requested the course after two recent incidents where drivers suffered heart attacks at the wheel, then subsequently died.

Around 60 of Edinburgh’s 140 wardens have now volunteered for the new initiative which involves a weekly two hour session run by qualified instructors.

The course has the full backing of NSL, the company who employs the city’s wardens, and is part funded by the British Heart Foundation.

Parking supervisor Claire Tervit – a qualified first-aider – has led the campaign to encourage colleagues to learn cardio-pulmonary resuscitation and other basic techniques.

She said: “It’s all about being able to save someone’s life if you have to.”

Her determination for wardens to know more about life saving techniques was prompted by two incidents in the capital when her staff came across motorists in a critical condition.

Last November, one man was found slumped over his steering wheel in the Fountainbridge area of the city suffering a brain haemorrhage, and an elderly woman was discovered earlier this year having collapsed.

Both drivers passed away after being found.

Ms Tervit added: “I already volunteer for St John Ambulance, and following these incidents, I began talking with a paramedic about what training we could do.

“He suggested the Heartstart initiative, with the British Heart Foundation, and we took it from there.”

Someone in Scotland suffers from a heart attack every 15 minutes with about half of all cases proving fatal.

A spokesperson for NSL said: “It’s a fantastic idea and if it proves successful we hop to roll the course out to wardens across the country.

“The wardens in Edinburgh actually requested the course because of two instances of people suffering heart attacks when our attendants were present.

“Our staff are already responsible for helping to reduce crime in areas they operate in, and clearly there will be occasions when basic first aid will be needed.”

And transport convener Phil Wheeler added: “A parking attendant could save your life.”

Edinburgh based start up launch crowdfund