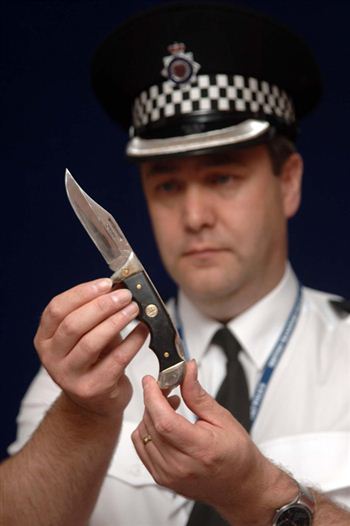 AT least five children under the age of ten have been caught carrying knives on Scotland’s streets in the past year.

Shocking figures revealed two eight-year-old kids and three nine-year-olds were charged after cops found them with blades in Edinburgh.

And two 11-year-old children were also charged after having the weapons in the capital.

The numbers for the whole of Scotland are likely to be much higher – with the capital alone reaching a five year high on youths being charged.

Politicians and parents’ groups have blasted the worrying figures, released under Freedom of Information laws.

They say it is unacceptable that the message about the dangers of carrying a knife has still not hit home with young people.

Liz Smith MSP, the Tories’ schools spokeswoman, believes that schools need to be given more power to deal with the problem.

She said: “Head teachers should have powers to search for weapons if they suspect a child has come into school carrying a weapon and they should be able to take action to isolate that child.”

But Tina Woolnough, chairwoman of Parents in Partnership, said there needed to be a shake-up in the way children were educated about knife crime.

She said: “At school, children learn about keeping themselves safe and healthy and I think information about knives should be included in the standard package.

“By high school I would have a zero-tolerance policy on carrying knives.”

A Scottish Government spokeswoman said: “We’re working with the experts in our national Violence Reduction Unit and police forces on tough enforcement to take weapons off the streets.”

Police chiefs say the rise in the number of youths being caught is a reflection of the force’s crackdown on the problem, which includes searching on city buses.

Officers also believe that increased awareness may be leading children to report their classmates when they know they have a bladed weapon.

A police spokesman said: “We are committed to engaging with young people as early as possible to illustrate the dangers connected with drugs and violent crime.

“The rise in the number of youths being caught highlights our dedication to tackling crimes of this nature.”

The figures also revealed a drop in the number of under-16s caught with offensive weapons for 2008.

Fundraiser for man who was stabbed through the heart reaches over £90,000