A GROUP of campaigners chained themselves together yesterday to campaign for the release of a top doctor jailed for speaking out about poverty.

Doctor Binayak Sen worked with the poorest people in central India for decades but was thrown in jail two years a go for speaking up for his patients.

The shackled campaigners – who included MSP and GP Richard Simpson – dressed in white coats and masks outside the Royal College of Surgeons in Edinburgh.

The organisation considers his sentencing to be based on ‘trumped up charges’ that are related to his political work.

He added: “When he started to question why people there are poor, he began challenging the government and suddenly he became a problem.”

The two year anniversary of his imprisonment is now being marked around the world – with 22 Nobel laureates signing a letter in his defence.

He said: “The Indian government don’t want us to be talking about these actions and we hope this will help to ensure a fair and speedy trial or his release, which would be even better.”

The campaign will meet with the Indian consulate in Edinburgh to discuss the case and hope the Indian government will act quickly. 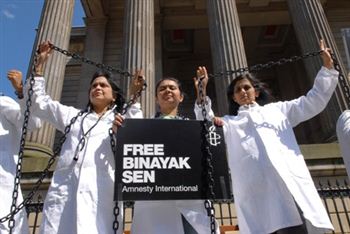 Richard Simpson MSP said: “I am here as an MSP, a doctor and a previous justice minister within the Scottish government, to make sure we get this man released.”

The campaign organisation contacted the MSP to get him involved with the case.

He added: “The fact that Doctor Sen has not been allowed bail in the past two years and his health has been deteriorating for what seem to be fairly trumped up charges is wholly inappropriate.”