A TEAM of MPs, MSPs and celebrities took to the field at Ibrox yesterday, battling out a high scoring contest in aid of an employment support programme.

The star-studded team, which included Secretary of State for Scotland Jim Murphy MP and disgraced TV presenter Angus Deayton, overcame a team of participants from the Support Employment programme sun by Rangers and Celtic football clubs.

The surprisingly fit celebrity team, clad in Rangers garb, were held until just after half-time, with game finishing 7-4 after a brace of late goals, including a cool finish from Secretary of State Murphy.

Less impressive was Frank McAveety MSP, who had to endure taunts of “We’re playing in blue Frank!” after a series of failed forward ventures down the right wing.

The match was played in good spirits, although the experience of pulling on a Rangers strip must have been painful for Jim Murphy a life-long, die-hard Celtic fan.

He said: “We’re having great fun, and it’s fantastic of Rangers to let us use this brilliant stadium.

“Some of these folk have been out of work for a long time, some since before the recession, and it’s important to help them get the skills they need to turn their lives around. 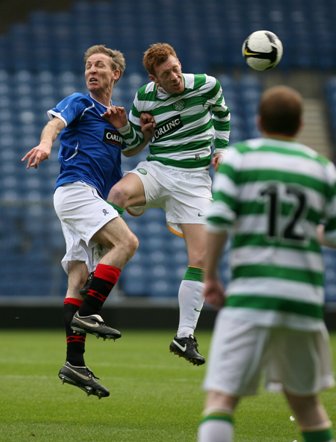 “Football clubs are part of the community and teams like Hibs, Falkirk, Rangers and Celtic do a lot of this kind of thing, so we have a lot to be proud of in Scotland.

“This is a day we’ll all remember for the rest of our lives and I’m delighted to have been involved.”

The training programme assists people looking for work by helping them develop the skills needed to hold down long-term employment.

Rangers and Celtic are both sponsors of the programme, which has had a 75 per cent success rate in finding jobs for those taking part.

Raymond Farrelly, community manager at Rangers Football Club, said: “The Support Employment project is one of the most successful initiatives within the Rangers community programme, and sees more than 6,000 people participating in a range of initiatives each week.

“We were delighted to welcome everyone to Ibrox today, and the match was a great way to highlight the success of the programme, as well as the commitment of everybody involved.”

Robert Docherty, head of the Celtic Foundation, said: “We are delighted to be involved in this project – through this programme Celtic have already employed 12 participants in various parts of its business, including in the areas of coaching, catering and retail.

“Celtic FC is fully behind the Support Employment initiative as it aims to make a real difference to participants.”