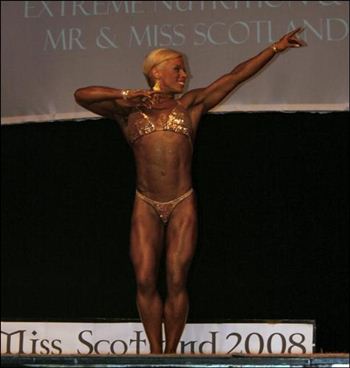 BY DAY Laura Irving helps to save the lives of hundreds of patients – but by night the Edinburgh staff nurse slips on her leotard and works her body to its ultimate.

The stunning, award-winning body-building nurse has just walked off with the coveted title of Miss Scotland in the trained figure category of the National Amateur Body-Builders’ Association.

It is the second year running the muscle-bound 28 year-old has taken the title and is now setting her sights on the British title to be held at the end of the month.

The full-time nurse works at Edinburgh’s Royal Infirmary in the orthopedic trauma theatre and has to stick to a gruelling fitness and diet regime which sees her eat only turkey, green vegetables and oil supplements.

And the former-personal trainer also has to squeeze a daily four hour fitness regime into her hectic schedule.

She said: “It was amazing winning the title, but without the support of the people I work with I could not do this. They understand my training, the fact I have to eat every two hours, and they are flexible with my competitions.

“If it wasn’t for all the support I have had, I don’t think I could ever have competed.” 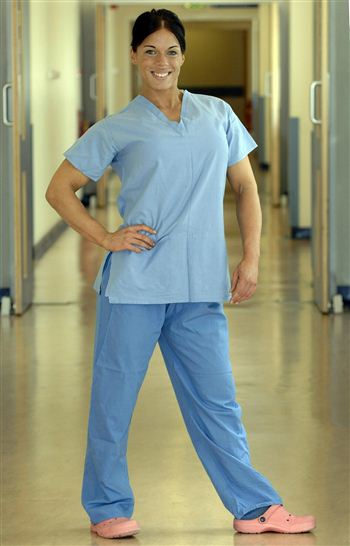 But Laura’s strict training regime – which limits her to just glasses of water during the day – is taking its toll on Laura as she has to cut out all the little luxuries her colleagues are allowed at break times.

She said: “I never get used to it to be honest. Some people do, but I struggle as I really do love food.”

Laura began competing as a body-builder in 2007, around the same time she completed her nursing training.

But her love of fitness is nothing new as Laura has danced since childhood and worked as a personal trainer to members of the Saudi Royal Family.

And unlike most of her competitors Laura likes to incorporate dance into her body-building routines.

She said: “My dad used to do weight lifting and he had a multi-gym in the garage I used to workout with him.

Many of her nursing colleagues joined Laura’s mum, dad and brother, along with her professional body-building boyfriend Michael O’Hanlon, at last week’s Glenrothes ceremony to see her crowned Miss Scotland.

Laura’s next challenge will come just three days after her 29th birthday and she is working as hard as she can to bring the British title back to Scotland.

She said: “I’d like to be in a good position for a title and I hope my hard work shows on stage.

“I won’t be able to have any birthday cake though – definitely not.”