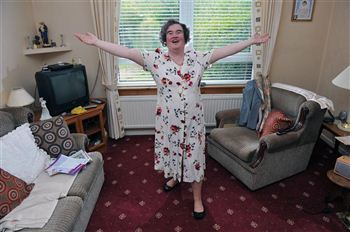 HOMER Simpson has revealed he is a fan of Scotland’s favourite new superstar Susan Boyle.

The cartoon has dedicated a whole show to Britain’s Got Talent, with a contest set in the fictitious town of Springfield.

And Bart Simpson’s tubby dad Homer reveals to an animated Simon Cowell that his “dream is to be a great singer like Susan Boyle.”

He even emulates her charm offensive to try to win over the judges, saying: “I’ve never been kissed.”
Susan’s real-life brother Gerry said she is a fan of the show and would be “chuffed to bits” to feature on it.

Ladbrokes said yesterday (Wednesday) that the West Lothian singer remains odds-on favourite to win the talent show, which would see her performing in front of the Queen at the Royal Variety Performance.

But fans of The Simpsons will have to wait to find out whether Homer hits the heights of Susan Boyle’s fame and widely expected fortune with his own performance.

The 48-year-old self-confessed virgin from Blackburn has amassed millions of fans across the world, especially in America. 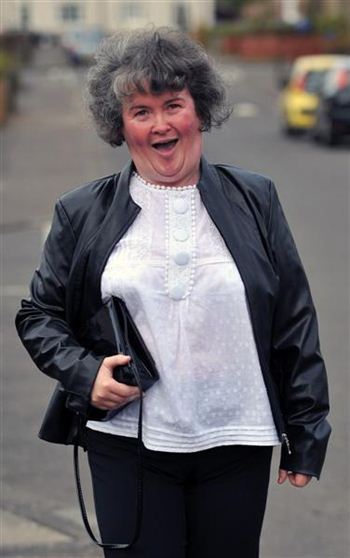 She has even reportedly been invited to dine at the White House with US president Barack Obama.

In the “Springfield’s Got Talent” Simpsons episode, screened in the US as part of the show’s 20th anniversary season, Homer re-enacts Boyle’s famous audition.

Asked by the judging panel to introduce himself, Homer replies: “My name is Homer Simpson, I’m 39 years old and I’ve never been kissed.

“My dream is to be a great singer like Susan Boyle.”

The singer’s family say she will be keen to see the episode.

Brother Gerry said: “She does watch the show and she will be chuffed to bits to get a mentions, I’m sure.

“It’s incredible how popular she has become in America. I haven’t seen her for a few weeks because she’s been so busy.

“I would like to see her actually appear on The Simpsons as it would be great to see yourself as a character on such a huge show.”

Her mention on The Simpsons comes hot on the heels of a mention in another hit US cartoon, South Park.

In the episode, aired last month, baby character Ike cites Boyle as the reason why he and Cartman are escaping the US to live with Somali pirates.

Writing a note to their parents, Ike writes: “Dear mom and dad, I am running away.

“Everyone at school is a f***ing idiot and if one more person talks to me about that Susan Boyle performance of Les Miserables I was going to puke my balls out through my mouth.”