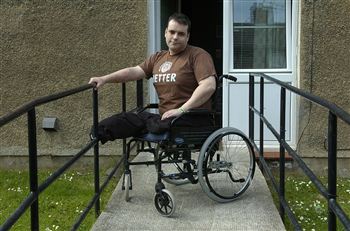 AN ASPIRING author who had his legs amputated after suffering a savage beating has had his specialist wheelchair stolen while in London auditioning for a TV role.

Ian Colquhoun, 31, from Edinburgh, was left disabled after being attacked with a pick-axe handle while he slept during a horrific assault on Christmas Day in 2002.

His attackers were ransacking his then home in the Irish Republic when he was struck repeatedly over the head with the blunt instrument.

The callous thugs, who have never been caught, then set fire to Ian’s home leaving him for dead.

He barely survived the horrific assault after spending seven weeks in a coma and was left with 65 per cent burns to his body.

Now, Ian has been dealt another sick blow as thieves made off with his expensive specialist wheelchair while he was auditioning for a part in the BBC soap Doctors last month.

The brave Scot, who has slammed the thieves as “sickos” and “scumbags”, has battled back from his debilitating injuries and is now a successful author, actor and part-time television stuntman.

He was trying to land the part of a cancer patient’s relative at the Beeb’s television centre when three men, thought to be in their late teens or early-20s, were seen leaving with Ian’s wheelchair.

Ian said: “I was sitting at a picnic table outside the television centre in the afternoon. I had my prosthetic legs on and I had left my wheelchair on the grass no more than 15 yards behind where I was sitting.

“I was having an informal chat with the producer about the possibility of appearing in a Horizon programme about stem cell research.

“I even joked with them that nobody would steal my wheelchair.

“It happened in a blink of an eye – I had my back to the three men who took it.

“We clocked that it had vanished and the producer chased after them.”

The thieves were then later caught on CCTV performing stunts on the £300 Invacare Zipper 2 chair, but police failed to track them, or the chair, down.

Ian, who can only walk a short distance with his prosthetic legs, was then left without a wheelchair for around four hours as frantic BBC staff tried to find a replacement from the BBC’s medical room.

He said: “Four hours can be a long time when you’re stranded in London, but the people from the BBC stayed with me the whole time.

“I hurt my knee – I cut a recurring wound on my kneecap open again, because I wasn’t using my own wheelchair.

“I was able to laugh a wee bit, just at how unbelievable it was and the audacity of it, but the scumbags who took it are sickos for stealing a wheelchair.

“They are pretty sick in the head.”

Around five days after returning from London, NHS Lothian provided Ian with the same type of chair that was stolen.

And the Scots actor has revealed he is heading back to London in early June for the official launch of the BBC’s disability casting register.

A spokesperson for the Metropolitan Police said: “The victim was in the garden area at the BBC studios in White City at the time of the incident. CCTV has been viewed during the course of the investigation and no arrests have been made.

“At this stage we have exhausted all lines of inquiry, but if anything new comes to light, we would investigate it.”