CALLS for a general election intensified yesterday as a team of senior Tory politicians appeared at the Scottish Parliament to back the Conservative Party’s “Sign for Change” campaign.

David Mundell MP, Annabel Goldie MSP and front-bench UK Tory Theresa May challenged the Prime Minister to immediately call a general election in the wake of the expenses scandal.

The call comes as the scandal continues to hurt members of all political parties, as the Daily Telegraph continues to drip-feed damaging revelations.

Annabel Goldie, leader of the Scottish Conservatives, said: “There’s a terrible stench hovering above the political world, and David Cameron and I are very clear that the only way to dispel that stench is to let voters have their say.

“We have a stale, failed government and what we need is a leader who is in control, not one who is floundering around from one crisis to the next.

“David Cameron has been very swift in dealing with his own party on this issue – there have been apologies, repayments and resignations.

“He has shown leadership and decisiveness, and this country needs more of that in the form of a new government.”

Goldie joined Theresa May and David Mundell, Conservative MP for Dumfries and Galloway, in signing the Conservatives “Sign for Change” petition. 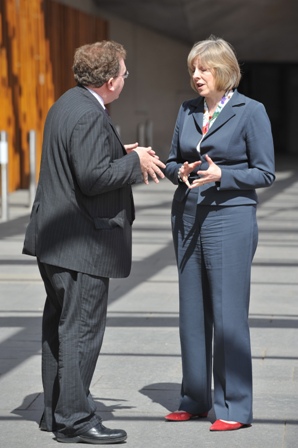 The petition – launched by David Cameron to coincide with the party’s European election campaign – calls for the “dissolution of parliament” so that “people can pass their verdict on MPs’ behaviour at the ballot box.”

Theresa May, Shadow Secretary of State for Work and Pensions, said: “We believe that a general election is needed, the government is paralysed at the moment and the people need to have their voices heard over the expenses scandal.

“MPs would have to justify themselves on the doorsteps of their own constituents, and those same people would have their say over what should happen to their future.

“We’ve got an economic crisis, a broken society and broken politics and what we need now is not just a new system of rules in Westminster, but a new parliament.”