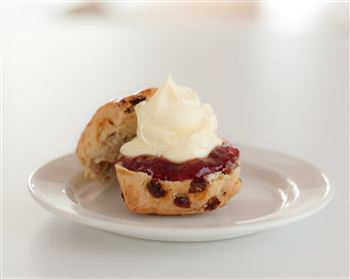 THE humble cup of tea used to be a staple of the British diet until reports surfaced last week that its price was set to rocket due to a shortage of tealeaves.

But in the face of a tea crisis, one hotel chain is doing everything it can to encourage people to “indulge” in a budget cream tea offer.

A combination of drought in three pf the largest tea-producing countries – Sri Lanka, India and Kenya – and the weak pound mean that the import is costing the producers of high street brands more and more.

Tea, which is sold in dollars, has rocketed from $1.76 a kilo in 2007 to $3 a kilo in recent months, mainly due to the smaller amounts being produced.

But Travelodge are determined to provide affordable tea for their customers – keeping the afternoon tea tradition alive.

In a recent survey, they found that 32 per cent of Scots associate having tea with a holiday in the UK – something more of us are expected to do this year due to the credit crunch.

And 14 per cent of the nation turn to tea when they are feeling down in the dumps and need a lift.

Keith Newton, an Afternoon Tea Connoisseur said that they have seen an increase in the number of people booking in for an afternoon tea – which he describes as “comfort food at an affordable price.”

Keith said: “Rather than suffering a downturn during the credit crunch, we have seen a steady month on month rise in visitors and bookings, which is a testament to the fact that taking afternoon tea is an increasingly popular occasion.

“Britons are turning back to their traditional pastime, as it is comfort food at an affordable price.”

And the hotel chain have also solved the age-old argument of whether to make a cream scone the Cornish or Devonshire way.

They found that a whopping 70 per cent of Scots preferred the Cornish way – putting jam on first and topping it with cream.

Nicholas Rodda from Rodda Cornish Clotted Cream, said: “A cream tea is an affordable way to indulge yourself.

“For generations we have served the cream on top of the jam, which means you can fully enjoy the pure and luxurious flavour of the cream.”

The hotels are going to be serving cream tea for a bargain 99p – including a large scone, clotted cream, jam and a collection of teas.

Guy Parsons, Travelodge UK Managing Director said: “Our budget 99p cream tea is going to be a big attraction this summer with 2009 being such a big year for the British holiday.

“Our seaside and tourism locations are booming and we know that these customers want to enjoy our culture’s great traditions including the cream tea.”