A SCOTS courier firm faces rebranding its entire fleet – because of a Europe wide shortage of RED coloured vans.

But so far the firm – which has transport bases in Glasgow, Edinburgh and Bathgate – is being offered only tradition white alternatives.

Figures suggest the worldwide credit crunch means there are something like 23,000 white vans lying unsold on forecourts around Europe. 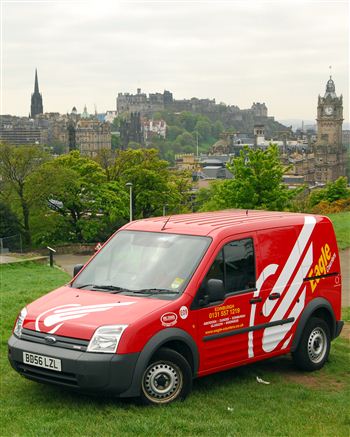 Rather than forking out on what could prove to be costly re-sprays to match their fleet, Eagle Couriers say they are now considering even more drastic measures, changing altogether.

“If we can’t source red vans soon – or if we don’t hear of red vans being available – then we may have to look at changing the fleet over to another colour.

“Apparently there’s something like 23,000 white vans lying unsold in Europe, so that may be the way forward.

“But it would be a shame to lose our distinctive livery as it’s built up a lot of goodwill over the 30 years we’ve been in business.”

With the Government offering £2000 for those who trade in old cars, he even joked that there should be an incentive for people to trade in red vans.

He said: “It’s been an incredible 12 months for us between new business, buying up competitors like QED and natural wear and tear on vehicles, so we went to get replacement vans.

“However when we went to van suppliers they told us that there’s a shortage of red vans – they aren’t being made due to the credit crunch.

“Coloured vans just aren’t being made in the traditional numbers.

“We can’t get our hands on them at all.

“Here we are a Scottish success story, business improving thanks to our growing reputation for quick delivery across the UK and we’re stumped for red vans.”

But the RAC Foundation say swapping colour may be no bad thing for the firm as white has been proven in tests to be the safest colour for driving.

RAC Foundation spokesman Philip Gomm said: “Daimler Benz did a study a few years ago, which showed white was the safest colour for a vehicle in most lighting conditions.

“Another study, carried out in 1995 showed that on mainland Europe, white fire engines tended to be in less accidents than red fire engines.

“In America, another report stated that white allowed for very high visibility across a variety of driving conditions.”