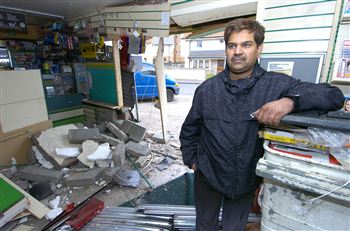 RAMRAIDERS snatched £10,000 of booze and cigarettes after slamming a car into an award-winning shop.

The four suspects have been branded “scum” by Ijaz Nazir, who owns Jazz Licensed Grocers in Edinburgh.

He fears his beloved store is in danger of collapse after yesterday (Tuesday) morning’s raid, which saw a car crashing through the shop’s metal shutter, glass window and main door.

Devastated dad of three Mr Nazir, 45, said: “I only have one shop and it is my livelihood to feed my family.”
A burned out Vauxhaul Vectra was found close to the shop, and four people were due to appear in Edinburgh Sheriff Court in connection with the raid yesterday.

Police said they recovered over £6,000 worth of drugs and stolen property during a house search in the Niddrie area following the robbery.

Pakistan-born Mr Nazir has lived in Niddrie for two decades and won a clutch of awards for his shop, including Edinburgh City Council’s 2005 Good Citizenship Award for his services to the community and work to improve race relations in Craigmillar and across the Lothians. 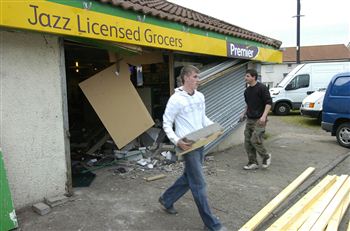 He said: “I rushed to the shop and I found a terrible mess. It was very painful to see.

“The whole exhaust from the car was lying inside the shop and part of the roof was hanging off. All the cigarettes – hundreds of packets – were gone, and quite a lot of spirits.

Now builders are racing to save the building from collapse, while neighbours are helping Mr Nazir to clean up.

He added: “The roof is very dodgy just now because the main supporting pillar is hanging down, so there is no support.

“The builder said he will have to do something very quickly to save the roof, or it will collapse.”

Police were examining the car, which fire crews confirmed they found ablaze in Niddrie House Park around 5am.

Mr Nazir, a former vice-chair of Craigmillar Community Council, added: “It’s a lovely community and I don’t have any personal grudges with anybody.”