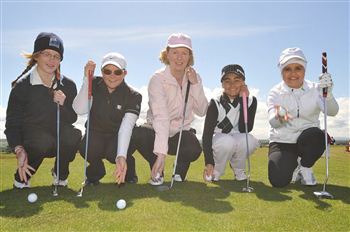 THE WORLD’S next Tiger Woods could have been on the course as over 400 of the world’s best junior golfers kicked off the US Kids Golf Championship in East Lothian yesterday.

The sport’s best youngsters aged between five and 14 have travelled from 34 different countries to participate in the prestigious three-day tournament.

Designed to be a showcase for the world’s best golfing talent – the tournament will also bring in over £2.5 million to the Scottish economy.

The event – to be held across five historic golf courses in East Lothian – sees boys and girls split into different gender and age categories in order to compete for the overall title of U.S. Kids Golf European champion.

Young golfers take to the course

The youngest player to take to East Lothian’s famous links is five year-old Billy Gunyon-Perry who has been playing since the age of three.

The pint-sized clubber, from Essex, is up against another golfing prodigy, six year-old Jaden Saunders from North Carolina.

Jaden, who was crowned the US Kids Tour champion last year, first picked up a golf club at the age of two and now regularly strikes the ball more than 150 yards off the tee.

John Godwin, tournament director and former PGA Junior Leader of the year, said: “Despite their age, these players demonstrate great poise, balance and professionalism – for example you very rarely see a fluff or mishit shot.

“Even the very youngest participants are able to navigate the courses and shoot impressive scores.

“Anyone who has not watched the elite of today’s junior golfers in action is in for a treat.

“If we get good conditions, I’m confident we will see a host of superb sub-par rounds.”

The kids have travelled to Scotland from as afar afield as Australia, China, Philippines, United Arab Emirates, Guatemala, Peru, Puerto Rico and Panama and the United States.

Most have travelled to Scotland with their entire families in tow – meaning a huge financial windfall to the Scottish economy.

Travelling the furthest to the links on East Lothian will be Aussie teenager DJ Loypur, who is making a 10,500 mile trip to compete.

The tournament has been organised by the U.S. Kids Golf Foundation – an organisation launched in 2001 to provide opportunities for kids to play and learn the game through local tours and tournaments.

Since its inaugural tournament in 2000, the U.S. Kids Golf Foundation now runs 400 events each year with the 2008 World Championships attracting more than 1,200 players from 34 countries.

Scottish Sports Minister Shona Robison, who attended the opening day, said: “In the year of Homecoming and at a great time for golf in Scotland, I am delighted that this tournament is returning to the home of the game.

“Golf is a big part of our culture, our identity and our economy in Scotland and taking up the sport is a fun and exciting way for children to enjoy being active and healthy.

“Clubgolf, our National Junior Golf Programme, continues to make tremendous progress getting boys and girls involved in the game. Two thirds of primary five children in Scotland were introduced to one of our favourite national pastimes last year.

“This championship will provide a huge boost to the local economy in East Lothian and help cement Scotland’s reputation for encouraging and developing the game of golf amongst young players.

“I hope that this competition will boost tourism and encourage children from around the world taking part in the event and their families to return to visit Scotland in the future.”

Antarctic glacier may be more stable than initially feared

Veteran Dad shares words of wisdom ahead of Father’s Day